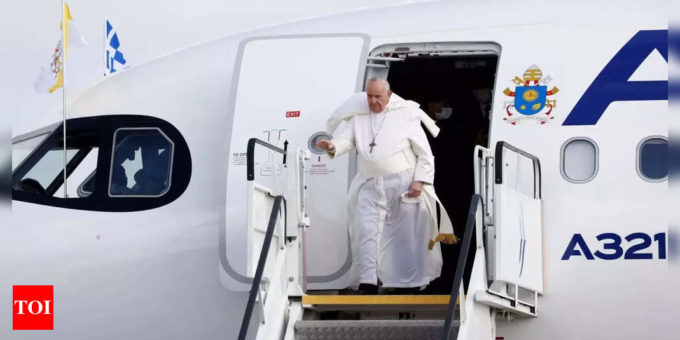 VATICAN CITY: Pope Francis on Sunday offered prayers for Ukraine, and urged dialogue and not weapons as Russia masses tens of thousands of troops on its border with Ukraine.
Francis didn’t mention Russia by name in comments to the faithful during the traditional Sunday blessing in St. Peter’s Square, but the implications seemed clear as he called for international dialogue to defuse the crisis.
The pontiff prayed for “dear Ukraine, for all its churches and religious communities and all of its people,” and expressed hope that “tensions would be resolved through serious international dialogue and not through arms.”
The Vatican has been loathe to criticize Russia over its Ukraine policies for fear of alienating the Russian Orthodox Church.
Just last week, Francis said he was hoping to meet in the not-too-distant future with the head of the Russian Orthodox Church, Patriarch Kirill, following their historic 2016 encounter in Cuba.
Speaking to reporters as he returned from a trip to Greece and Cyprus, Francis said he planned to meet next week with the Russian church’s foreign envoy “to agree on a possible meeting” with Kirill. The pontiff noted that Kirill is due to travel in the coming weeks, but Francis said he was also “ready to go to Moscow” even if diplomatic protocols weren’t yet in place.

Do You Know What Neena Gupta Had For Breakfast On Sunday? Itll Leave You Drooling
2022-03-20