Breaking News
2022-06-25 Shahid Kapoor is having the best time in Switzerland with wife Mira and kids, writes ‘heart his full’. See photos 2022-06-25 EU’s Borrell in Tehran for talks on reviving Iran’s 2015 nuclear pact 2022-06-25 In Showtime’s “Yellowjackets,” Christina Ricci finds the role she has been looking for. 2022-06-25 The moment a woman was saved from rushing flood waters in China 2022-06-25 Dozens of migrants piled on the ground in Melilla disaster, rights group says 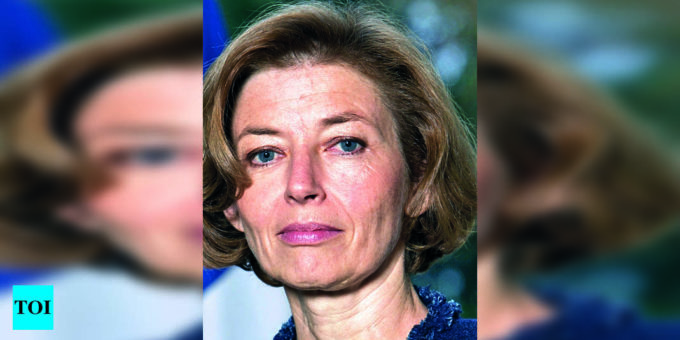 France is still seething over the AUKUS military pact among the US, UK and Australia, which cost it a mega submarine deal. French defence minister Florence Parly tells TOI her country is committed to offering its best defence technology to India and collaborate in areas like artificial intelligence (AI), cybersecurity and space security. Excerpts from the interview:
What is your agenda for talks with defence minister Rajnath Singh and others on Friday?
The Indo-French strategic partnership has demonstrated exceptional solidarity and commitment. France has fulfilled its commitment to delivering Rafale fighter jets on time (33 of the 36 till now) despite disruptions by the pandemic. Our armed forces have reached new levels of interoperability with major exercises this year. The partnership is our best asset to shape the post-pandemic world, defend our common values, and promote a multipolar world. We will hold our Annual Defence Dialogue to review and advance all aspects of our cooperation. I will also reiterate France’s commitment to offer the best of its defence technology with a high ‘Make in India’ component. I also want to take this opportunity to pay my tribute to CDS General Bipin Rawat on his tragic demise.
What are the future prospects of the India-France partnership?
Our strategic partnership, grounded on enduring shared interests and an exceptional level of trust, enables France and India to work together in sensitive areas to enhance our autonomy and sovereignty. In defence, by sharing best-in-class capabilities such as Rafale, and technology transfers like in the Scorpene submarine project. Today, we are expanding to new areas like AI and supercomputing, cybersecurity and space security. France and India enjoy long-standing civilian space cooperation. That’s why we also want to join hands on space safety and security issues by establishing a dedicated dialogue. The goal is to share threat assessments, coordinate our response strategies, and jointly promote international norms to ensure a free and secure space. We build satellites together, it’s only natural to also work together on protecting them.
Has there been any fallout of AUKUS on France’s strategy for the Indo-Pacific?
AUKUS doesn’t change geography. France is a nation of the Indo-Pacific, and India is our foremost strategic partner to keep this region free, open, and prosperous. France and India share the same clear-sighted assessment of the challenges, including in terms of maritime security. But a reductionist approach of military blocks, where countries give up the responsibility of their security, is not the solution. Our answer is to bring together countries willing to uphold the rule of law without giving in to any hegemony.
France will take over the EU presidency in early-2022. How will India feature in your priorities?
Our first priority will be to build a powerful Europe that is in control of its destiny. This ambition is in keeping with France and India’s drive for strategic autonomy. It makes the EU India’s natural partner to work together on building a truly multipolar world order, beginning in the Indo-Pacific, where Europe has much to offer – from enhanced naval presence to tangible solutions for connectivity, environment protection and health. We will utilise our presidency to deliver concretely on this, with India at the core of our efforts. In particular, we will invite the nations to an Indo-Pacific ministerial forum in February.
What do you think about China’s aggressive behaviour in the Indo-Pacific and the continuing military confrontation in Ladakh?
The interests of France and of Europe are directly affected by the issues at stake in the Indo-Pacific, including China’s behaviour. There is no naivete in Paris or the EU about this. We are committed to upholding the law of the sea, as demonstrated by our permanent military presence in the region, frequent naval deployments, and joint exercises with partners such as India.
As for eastern Ladakh, we follow events closely. No country can use the fait accompli policy. We welcome disengagement steps taken so far, and firmly believe in peaceful dialogue and respect for international law as the way forward.
There is still a lot of controversy over the Rafale deal?
It is not my place to comment on a political debate in India nor on press allegations. It should be noted the deal was thoroughly scrutinized by relevant bodies in each country including the Supreme Court of India in 2019. The Rafales are being delivered fully on time; IAF seems perfectly satisfied with their performance; offsets are being implemented; and French companies are more eager than ever for more ‘Make in India’ projects.

Shahid Kapoor is having the best time in Switzerland with wife Mira and kids, writes ‘heart his full’. See photos
2022-06-25

In Showtime’s “Yellowjackets,” Christina Ricci finds the role she has been looking for.
2022-06-25

Dozens of migrants piled on the ground in Melilla disaster, rights group says
2022-06-25

Ileana D’Cruz opens up about seeking therapy after break-up; says she wishes good for the ‘other person’ : Bollywood News
2019-11-10