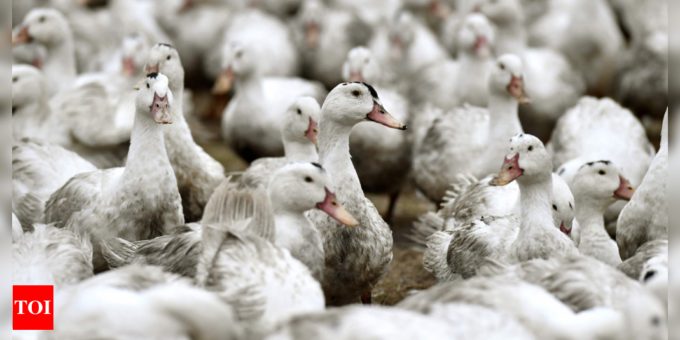 French farmers will have to confine their poultry, as the risk of bird flu has been raised to ‘high’ in mainland France due to the multiplication of cases in neighboring countries (AFP)

PARIS: France has detected a highly pathogenic bird flu virus on a poultry farm in the north of the country, the farm ministry said on Saturday.
The authorities, which said they had yet to identify the strain, are to slaughter the chickens and disinfect the farm to prevent the spread of the disease, the ministry said in a statement.
The outbreak followed several outbreaks among poultry farms in Europe and Asia in recent weeks in a sign the virus is spreading quickly again.
Several cases of severe bird flu had already been detected in France in the past month among backyard poultry as well as a wild bird, prompting the government to impose poultry flocks be kept indoors.
A massive wave of the virus last winter led the authorities to cull over 3 million ducks in its southwestern duck-breeding region known for production of foie gras pate.
Outbreaks can prompt importing countries, notably in Asia, to impose trade restrictions on poultry products.
They are also raising concern among epidemiologists as the virus can be transmitted to humans, especially as the world slowly recovers from the Covid-19 pandemic.
Bird flu, or avian influenza, is often spread by migrating wild birds.