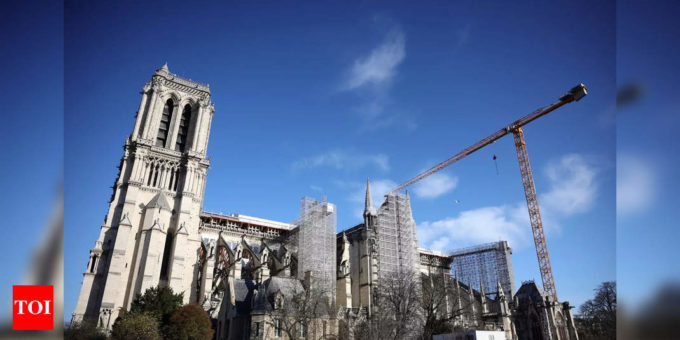 PARIS: A controversial redesign of the interior of Notre-Dame cathedral in Paris has been approved by heritage authorities, including possible street art installations and softer mood lighting.
Church authorities are adamant the plans — part of a wider rebuilding project following a devastating fire in 2019 — are not revolutionary and will simply offer visitors a warmer welcome.
But the changes have sparked criticism, with around 100 public figures putting their names to an opinion piece in right-wing newspaper Le Figaro on Wednesday saying they “entirely undermine the decor and religious space” of the Gothic landmark.
That did not sway the 20 experts of the National Heritage and Architecture Commission, who voted in favour of the church’s plans on Thursday.
“The experts gave a favourable verdict on the interior renovation programme,” the culture ministry told AFP.
They had a couple of minor reservations, including wanting to see a prototype of the new benches (with their own lights and a mechanism to raise them in and out of the floor) that will replace the old straw chairs.
“We are very satisfied with this decision which respects the broad principles that we outlined, including the work on the lighting and the guidance for visitors,” said Father Gilles Drouin, who is in charge of the interior renovation.
There was worldwide shock over the fire of April 15, 2019 that destroyed much of the roof and spire of Notre-Dame, which is visited by some 12 million people a year.
The diocese is taking the opportunity to rework the interior ahead of its planned reopening in 2024.
The culture ministry confirmed to AFP that street art pioneer Ernest Pignon-Ernest, as well as other modern artists such as Anselm Kiefer and Louise Bourgeois, are among the names being considered for display when new art installations replace some of the little-used 19th-century confessionals.
Other ideas include Bible quotes to be projected in multiple languages on the walls and softer lighting.
One Paris-based architect told The Art Newspaper that this risked turning Notre-Dame “into Disneyland”.
Critics in Le Figaro called for the authorities to respect the work of Viollet-le-Duc, the architect who overhauled the 12th-century cathedral in the late 1800s, though in keeping with the Gothic style that was enjoying a renaissance at the time.