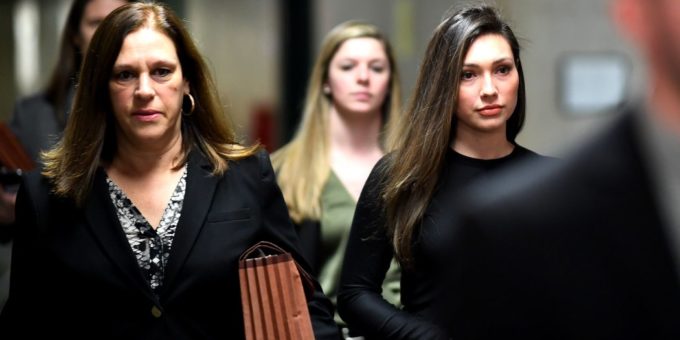 Prosecutors have won permission to call three other women to testify about the way Mr. Weinstein attacked them to establish a pattern of behavior, even though he was not charged with crimes in those cases.

The trial was one of the most highly anticipated proceedings in recent memory, seen by many as an important moment in the #MeToo movement, which was set in motion in October 2017, when, after years of whispers, several women went public with their allegations that Mr. Weinstein had sexually harassed or assaulted them.

Ms. Mann said she met Mr. Weinstein at an engagement party in the Hollywood Hills either in 2012 or 2013.

Over the next several weeks, he cultivated a friendship with her, she said. He took her to a bookstore on Sunset Boulevard where he bought her four books, telling her it was important to understand film history. Then there was the dinner at an Italian restaurant with his assistant, where Mr. Weinstein said he wanted to “plug” Ms. Mann “into his system.”

They met again at a bar at the Peninsula Beverly Hills hotel, where the producer suddenly asked about Ms. Mann’s personal life, upbringing and father’s finances, she said. She told him she had grown up poor in a trailer park.

He became irritated when guests at the bar recognized him, and he asked to move the conversation to his hotel suite. There he asked her to give him a massage, and she said she reluctantly agreed. Mr. Weinstein, she said, had “a lot, a lot of blackheads” on his back, she recalled.

Within the month, they met again at the Montage Hotel in Beverly Hills, where the producer told Ms. Mann and a friend that they would make “perfect leads” in the film “Vampire Academy.” He invited them to his hotel suite to review the scripts, but when Ms. Mann expressed concern, he said, “I am a harmless old man.”

Kashmir avalanche: ‘My baby’s toy torch saved me from death’

In former Syria rebel stronghold of Maaret Al-Numan, nothing was spared