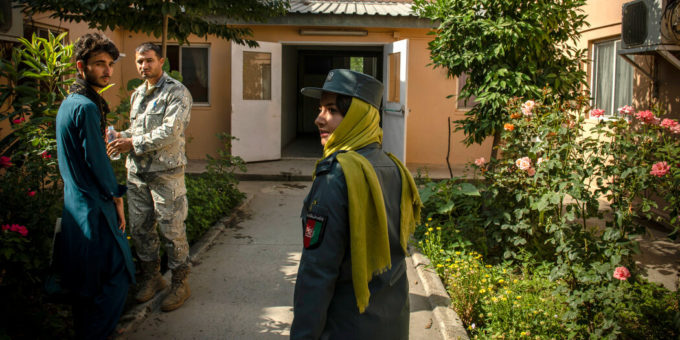 KHOST, Afghanistan — Motivated, educated and fresh from finishing police academy in Turkey, Second Lt. Zala Zazai had stellar qualifications for the job she took in eastern Afghanistan in June. It all mattered little once she started.

On social media, she was called a prostitute, and men wrote that her very presence on the force would corrupt Khost Province, where she was posted. Her colleagues at Police Headquarters — where she was the only female officer on a staff of nearly 500 — tried to intimidate her into wearing a conservative head scarf and traditional clothes instead of her uniform, and to hide in back corners of the office away from the public, she said. Shopkeepers arrived at the station’s gates with no other business but to get a look at this novelty.

Lieutenant Zazai, 21, came home from her first day feeling sick and frightened. She felt so unsafe that she asked her mother, Spesalai, who had accompanied her from Kabul, to stay with her at a shelter deep inside Police Headquarters. At night, the two women locked the door. During the day, Lieutenant Zazai scrambled to expedite the paperwork for a pistol.

“I want to have something to defend myself with,” she said.

Helping Afghan women, who were banished to their homes by the Taliban during their government in the 1990s, became a rallying cry for Western involvement in Afghanistan after the U.S. invasion in 2001. Two decades later, the rise of a generation of educated, professional Afghan women is an undeniable sign of change.

Now, with the possibility of power-sharing talks opening between the Taliban and the Afghan government, many women are worried that the strides they have made are at risk. What adds to their concern is how fragile the gains remain after two decades, where every mundane step is still a daily battle.

Even after more than a billion dollars spent on women’s empowerment projects, the daily reality for women trying to break into public roles — particularly with the government and the security forces — remains bleak. Women are still almost completely absent in high-level meetings where decisions of war, peace and politics are made. Work for women at routine jobs is a daily barrage of harassment, insult and abuse.

Among the police forces, which have been the focus of diversification efforts for years, women still make up only 2.8 percent of employees — and that is the highest level in 18 years. Most of those 3,800 women are in hidden roles with little contact with the public, officials acknowledged. Only five of the total of about 200 military and civilian leadership positions at the Interior Ministry are occupied by women.

For much of the past two decades, the task of including women in the police force often fell on former warlords and commanders whose beliefs about women differed only slightly from the Taliban’s, if at all.

President Ashraf Ghani has increased the number of female ambassadors, introduced female deputy governors and ministers, and sent female deputies to the ministries of defense and interior. But Afghan society remains deeply patriarchal, and the few women who have risen to such positions face many difficulties.

The strategy to include more women at less senior positions has been mostly to spend money and meet modest quotas. In the past six years, the Afghan government and its Western allies have spent more than $100 million on building facilities to support Afghan women in the security forces. In Nangarhar Province, they spent $6 million on a training facility for female police officers that remains unused three years after completion.

After repeated failures, recruitment efforts essentially boiled down to bribing women to join the force and stay. A woman’s incentives to join the police include eight more benefits than her male counterparts, according to Hosna Jalil, the deputy minister of interior. On several occasions, women of retirement age were allowed to fake their IDs and lower their age to stay on the force, she said.

Still, the goal of a 5 percent female presence in the police forces has never been met.

“Every province I have gone to, the first thing I say is that you are a force that is only working for men — not for women or children, the two most vulnerable categories who are left behind,” Ms. Jalil said.

It is not because qualified, willing women are lacking. It is because to join the police is to endure abuse and degradation.

Over the years, sexual harassment had been rampant in the security forces, with reports that the wives of officers killed in line of duty were harassed when they came to collect death benefits. The perception that female police officers were frequently harassed meant that women who were victims of domestic violence and other crimes dared not visit police stations.

“If only we had guaranteed a father that the dignity of your daughter is more protected in the ranks of the police because she has authority and professionalism here,” Ms. Jalil said. “We haven’t been able to create that mentality.”

Among those who endured years of mistreatment to follow her dream of rising in the security forces is Capt. Rahima Ataee, a 13-year veteran of the Afghan police special forces who now serves as the uniformed secretary to Ms. Jalil in the Interior Ministry.

Captain Ataee’s father, a retired police colonel, admitted her to the police academy, and her physical endurance qualified her for the special forces. She spent weeks at a time on the front lines in provinces under attack by the Taliban.

But at the mere question of how her male colleagues treated her in the field, she broke down. She said the bullying and abuse was such that “I developed mental problems.”

She would not tell her father at the time, she said, because she thought it would break his heart and lead him to prevent her from working. Every time she complained about the work environment after returning from a mission, she said, she would often get the same answer: “Well, you are getting paid.”

Before Ms. Jalil began her job as the deputy minister for strategy and policy — hired by Mr. Ghani to be fresh eyes in an institution long seen as corrupt and dysfunctional — she had to fight for acceptance.

Generals walked out of meetings when they found out she was in charge. Subordinates often fed her wrong information to undermine her.

“I often have to say I am not the head of the gender department — I am the policy and strategy deputy to the minister of interior. I work for this large force that is both male and female,” Ms. Jalil said. “I may have a female outlook, but any woman who comes should come for their expertise, not for them being a woman.”

These days, despite frequent sexist attacks on social media, Ms. Jalil says she has found her footing as part of a leadership team that is working to reform the police. They spend long hours in a quiet basement office poring over charts of a bloated structure that they are trimming, and have removed unnecessary bureaucratic steps that created opportunities for corruption. They are trying to hold the officers to new standards of accountability, and to better care for the families of tens of thousands of police officers killed in decades of war.

Lieutenant Zazai, who serves at the Police Headquarters in Khost, grew up in Kabul, the capital. Her mother has been the head of their household for seven years, and although her male relatives were opposed, she, her older sister, and her mother attended after-hours university classes financed with their own day jobs. Another sister is a student of Islamic studies.

She and her older sister are now both police officers. But they were only willing to take the first step when the opportunity to train in Turkey came up because of concerns about harassment and abuse in the local training academies.

The signs of the difficulty ahead were clear when the women arrived at the Police Headquarters in Khost to obtain signatures needed for their applications and an officer castigated them for wanting to join the force.

“What kind of a mother are you, bringing your young, unmarried daughters to become police?” Spesalai Zazai recalled one of the officers telling her.

After starting her job in June, Lieutenant Zazai found a difficult and lonely environment. At the time, she was the only professional female officer in Khost.

On her first day, she was catcalled by her fellow officers. Those at her office tried to convince her that it was better for her to work in conservative Islamic garb than to wear a uniform. When she insisted, they found a new tack: She should wear a mask, even though her colleagues did not. The pretext was Covid-19, the intention was covering her.

For the first two weeks, Lieutenant Zazai would spend her days at work, and in the evening she would retreat to the government guesthouse where her mother kept her company. She hadn’t faced a direct physical threat, she said, but she was aware of the reality, and her lack of a weapon added to her vulnerability.

She was devastated when her mother had to go back to Kabul, but Lieutenant Zazai is trying to make a go of it in Khost.

“May God make it easier,” she said. “But I have to find the strength — because it can’t go on like this, women should claim their place. I know if I spend a year here, it will make a difference.”