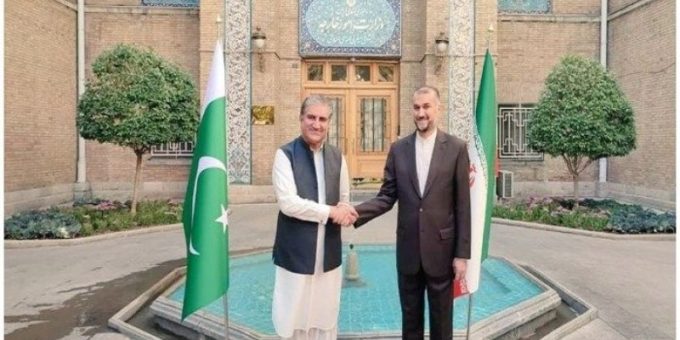 According to a statement by the Foreign Office, Qureshi’s remarks came at a luncheon with his Iranian counterpart Amir Abdollahian at the Ministry of Foreign Affairs in Tehran.

Special Representative for Afghanistan Ambassador Muhammad Sadiq, Ambassador of Pakistan to Iran, Rahim Hayat Qureshi, and other senior officials accompanied the foreign minister on the visit.

The two foreign ministers had extensive discussions on the crisis in Afghanistan and matters of mutual interest, said the statement.

The statement said that the foreign minister underscored the importance of close coordination between Pakistan and Iran for establishing peace in Afghanistan.

He asserted that joint efforts between the countries would achieve the shared objective of a peaceful and stable Afghanistan.

Recalling Pakistan’s initiative to evolve the regional approach on Afghanistan, FM Qureshi remarked that his visit to Tajikistan, Turkmenistan, Uzbekistan, and Iran had led to the first meeting of the neighbouring countries on Afghanistan, held virtually on 8 September 2021.

He reaffirmed that Pakistan would continue to extend support to the Afghan people by facilitating trade and movement across the border.

In the bilateral context, Qureshi reiterated Pakistan’s commitment to enhance bilateral relations with Iran in all areas.

The Iranian foreign minister thanked Qureshi for accepting the invitation to attend the second meeting of the neighbouring countries of Afghanistan, which is scheduled for October 27, 2021. He also reaffirmed the importance of close coordination between Pakistan and Iran on Afghanistan.

Abdollahian expressed hope for the success of joint efforts to help Afghanistan on its path to peace and prosperity and reiterated Iran’s full commitment to strengthening bilateral relations in all fields.

During his visit to Tehran, Qureshi will interact with the Iranian leadership. He will also meet his counterparts from the Central Asian Republics who are attending the expected meeting.