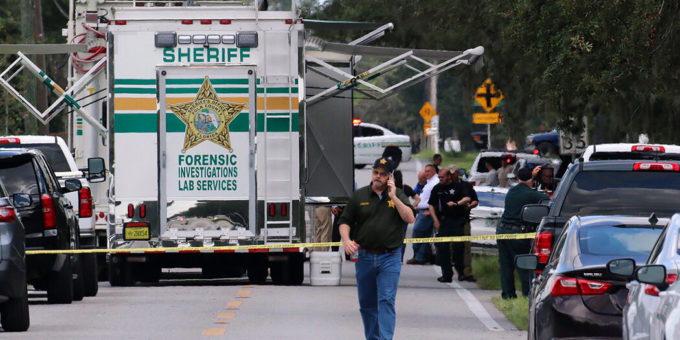 A gunman wearing body armor and described by a sheriff as “ready for battle” fatally shot four people, including an infant, in two homes near Lakeland, Fla., early on Sunday morning and exchanged gunfire with sheriff’s deputies before he was taken into custody, the authorities said.

The gunman, who also shot and wounded an 11-year-old girl, surrendered after he was shot at least once during two gunfights with deputies that involved dozens, if not hundreds of rounds, in an unincorporated residential neighborhood in Polk County, Fla., the county sheriff, Grady Judd, said at a news conference.

Three of the people who were killed — a man, woman and an infant the woman was cradling in her arms — were found inside one home, the authorities said. A fourth victim, a woman, was found shot to death in another home on the same property.

Investigators could not immediately say what prompted the rampage, which they said began around 4:30 a.m. They did not release the names of the victims or the gunman, who was taken into custody by officers from several law enforcement agencies in tactical gear as a helicopter hovered above the scene. No deputies were injured.

While the gunman was being treated at a hospital emergency room, he tried to grab a police officer’s gun and had to be medicated and restrained, Sheriff Judd said.

“He was ready for battle,” Sheriff Judd said of the gunman, who he said had told deputies that he was a “survivalist” and was taking methamphetamine.

The 11-year-old girl was flown to Tampa, Fla., which is about 35 miles southwest of Lakeland, and was in surgery, the sheriff said. She was “doing well,” he said, and was speaking to detectives. Additional information on her condition was not immediately available.

“She looks our deputies in the eye and said, ‘There’s three more dead people in the house,’” Sheriff Judd said.

He said the first indication that something was amiss came around 7:30 p.m. on Saturday, when a woman called the authorities to say that a suspicious man was sitting in a parked vehicle in the neighborhood.

She told them of a frightening encounter with the man, who she said had told her that “God sent me here to speak with one of your daughters.”

By the time a sheriff’s deputy arrived about six minutes later, the man was gone, Sheriff Judd said.

About nine hours later, a sheriff’s lieutenant who was on another call two miles away heard two volleys of automatic gunfire, the sheriff said. When law enforcement officers arrived at the property, which has three homes, they found a truck on fire.

“We saw an individual totally outfitted in body armor and looked as if he was ready to engage us all in an active shooter situation,” Sheriff Judd said.

The man retreated inside the home, and the sheriff said that officers could hear a woman scream and a baby whimper after more gunfire.

The sheriff’s lieutenant tried to enter the house through the front door but it was barricaded, the sheriff said. When he entered the house from the back, the gunman started shooting, and the lieutenant returned fire, Sheriff Judd said, adding that three other deputies were also “pinned down” during the standoff.

Sheriff Judd said investigators found a stockpile of supplies in the suspect’s truck, including a bleeding-control first-aid kit.

“Who in the world would ever expect to have an active shooter in a neighborhood at 4:30 on a Sunday morning?” he said.

Before investigators could enter the home, he said, robots were sent in to check for explosives or other booby traps. He did not say whether investigators found any.

“This is a horrific incident,” Brian Haas, the state attorney for Florida’s 10th Judicial Circuit, said at the news conference. “Our community and many families are hurting this morning.”

At the news conference, Sheriff Judd said he regretted that the gunman had come out with his hands up rather than brandishing a weapon.

“But he didn’t, because he was a coward,” Sheriff Judd added. “You see, it’s easy to shoot innocent children and babies and people in the middle of the night when you’ve got the gun and they don’t. But he was not much of a man.”

Kim Sharma makes relationship with Leander Paes Insta official, he has eyes only for her in new photo

Rajesh Khattar tests positive for Coronavirus, gets admitted to a hospital for family’s safety : Bollywood News
2021-04-18