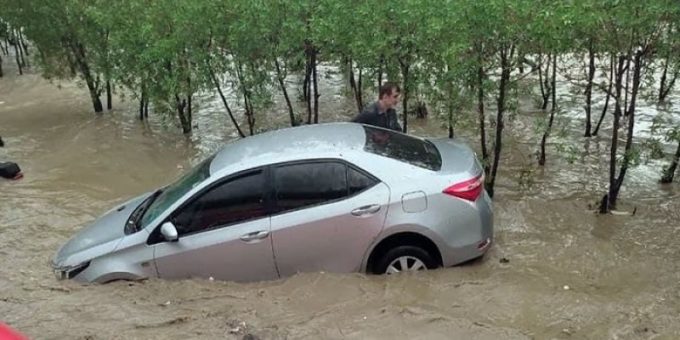 No casualties were immediately reported in the latest spell that began in the afternoon and disrupted life across the city in a matter of a few hours.

Videos and pictures shared on social media showed numerous areas, especially in the city’s Central district, inundated with rainwater and vehicles submerged up to their wheels. A large truck could be seen lying on its side near Nagan Chowrangi as residents waded through the water with their motorcycles and cars.

While out on a post-rain tour of the city, Karachi Administrator Barrister Murtaza Wahab said areas such as North Nazimabad, New Karachi and North Karachi saw flooding because of problems with the Green Line bus project infrastructure where two small pipes were unable to carry all the water.

He said while one side of the Nagan Chowrangi road was “completely clear”, the other side was inundated because rainwater had been blocked by the Green Line structure. The flow of water started after work was done to clear the pipeline, Wahab added.

Responding to criticism directed at the Sindh government in the aftermath of today’s rain, the PPP leader said, “Those railing against the Sindh government were saying [only] 10 days ago that rainwater did not accumulate in Karachi because the federal government had cleared the city’s nullahs. Where are these people now who were taking the credit?”

K-Electric, meanwhile, said its staff were working to restore electricity in the areas where rain caused blackouts. It said power supply was continuing through more than 1,850 feeders.

On Tuesday, the Met department had forecast rain/thunderstorms in Sindh from September 22 till Sept 25, saying monsoon currents were expected to penetrate into the province.

“Under the influence of this system, rain-thunderstorms with isolated heavy falls and occasional gusty winds are likely in Tharparkar, Umerkot, Sanghar and Badin districts during Sept 22-25,” the department’s advisory stated.

Pakistan will have to take difficult decisions in future due to IMF: SBP governor