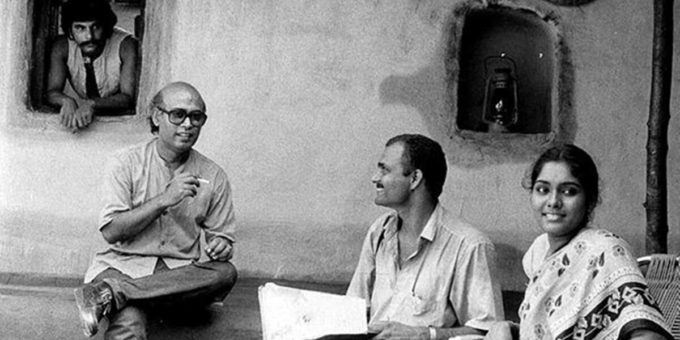 In Buddhadeb Dasgupta’s highly-regarded 1992 film Tahader Katha, a freedom fighter, Sibnath (Mithun Chakraborty) is released after 11 years of incarceration for murdering a British officer. His journey home along with is friend, Bipin (Deepanker De), is composed of trademark Buddhadeb Dasgupta shots. Glorious long shots of the men, almost reduced to a speck, against the startling rural Bengal landscape. Suddenly, Sibnath wobbles away to the corner of the frame, clutching his dhoti. He squats and starts taking a dump. When Bipin asks him what’s wrong, Sibnath matter-of-factly replies that he has no control over his bowel movement after years of his rectum being violated. He continues his reverie-like narration of his years in the prison while taking a dump. “In the beginning, when they would torture me like this, I would think of my motherland. Then slowly I started losing my mind. I would imagine I am taking my wife while being tortured.”

In a span of a few minutes, Buddhadeb takes you to deepest, darkest corners of his protagonist’s mind, while showing you how the trauma has affected him physically. And it’s all done with a sense of self-effacing, almost ribald humour.

When he wanted to, the self-confessed proponent of magic-realism in Bengali cinema could pack in layers of information in his frames, elevating a scene to almost subliminal level. He also had that rare gift of letting us believe that his characters are actually a part of the landscapes that he so lovingly captured. That they are (or could be) one with the nature. He is truly one of those filmmakers you’ll relate to if you love film itself, rather than its surface aspects such as story and stars. Here is a list of Buddhadeb Dasgupta films that makes for essential watching.

Released in the 1980s, starring his favourites Mamata Shankar and Anjan Dutta, Grihajuddha could have been easily mistaken for a Mrinal Sen film. After all, the stalwart of Bengali cinema has made some really pertinent films on the Naxalite movement too. But Buddhadeb, who was only a few films old when he made this, ensured Grihajuddha was unlike any other film dealing with the issue. Grihajuddha talked about the Naxalite movement, which shaped the consciousness of a generation of Bengalis, through the eyes of its female protagonist. Nirupama (Mamata Shankar), who loses her brother to the movement, is much more than a passive receptor of fate. She is the embodiment of hope and pragmatism of the future.

The film that bought him national recognition is adorned with a career-defining performance by Pawan Malhotra, who plays a bahurupee (a traditional rural Bengal dance form) dancer, Ghunuram, whose act as a bagh (tiger), is challenged when a travelling circus with a newly-captured leopard visits his village. Buddhadeb deftly handles themes of displacement and loneliness in this film, but his stand here is more political than ever. Ghunuram, who is also a migrant labourer, wants to hold on to the respect that the generational art form he has mastered offers him. He won’t compromise on the last shard of dignity that he has left in his life. But life has other plans for him.

What happens when a poet becomes a bird-catcher? In one of his most underrated film, Buddhadeb Dasgupta tells you about Lakha, a bird-catcher, who is driven by great empathy for the creatures he traps. His wife, Sari, is driven to the brink because he simply refuses to indulge in worldly matters. Though Charachar is probably one of his most poetic films, Buddhadeb Dasgupta ensures that we fall easily into its premise. We are comforted by its sense of timelessness. It is more of a fable in that respect.

Probably the most evocative film in his oeuvre, Uttara is laden with symbolism. At one level, it talks about fundamentalism and how it spreads its tentacles in our society. Made right after the Graham Staines murders, it earned its share of controversies because of the way it mirrors the case. But Uttara is much more than that. It talks about the bond between two wrestlers, which is challenged when a woman enters their lives. It says how toxic masculinity shapes a flawed, stilted society. And in the most subversive manner, it talks about sexual liberation of the oppressed.

Set in a brothel in the middle of nowhere, Mondo Meyer Upakhyan is a perfect example of the undiluted magic-realism style of his later films. We can’t always distinguish reality from dreams in this film shot in the stark landscape of Purulia. The tale of Lati (Samata Das), the runaway daughter of a sex worker, unfolds in a finely etched, familiar world even as they are governed by a magical yet unsettling dream logic.

Dino Morea on playing anti-hero Shaybani Khan in The Empire: ‘Had to bring out animal instincts of the character’
2021-08-26