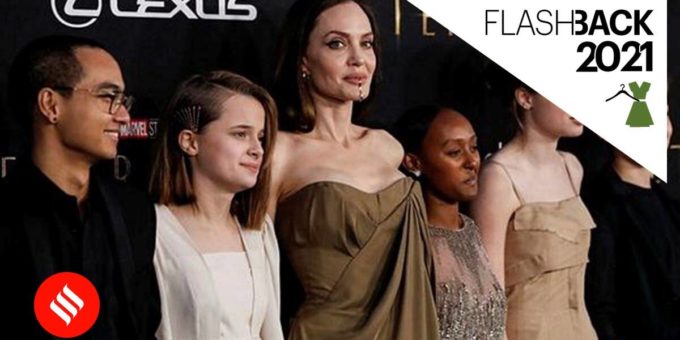 Tiffany Haddish might just have a favourite dress in her wardrobe like all of us do. A white Alexander McQueen number that she has donned five times during public appearances, and brought a new look every time with the same dress, thanks to creative styling.

Outfit repeats used to be a big no-no and even a taboo amongst silver screen stars, but that is the case no more. Celebrities, as well as royalty, have repeated dress with élan this year. And why not? If you have a favourite dress, you should get to flaunt it more times than just one.

Even amongst outfit repeats, we have a favourite — when Angelina Jolie’s daughters wore two beautiful outfits from their mother’s wardrobe. At the premiere of Jolie’s movie Eternals, her daughter Zahara wore the Elie Saab gown the actor wore at the Academy Awards 2014 while Shilo wore a Gabriela Heart number her mother donned at the Guerlain’s ‘Women for Bees’ campaign in July 2021.

Kareena Kapoor Khan wore the same leopard print turtle neck top with a plunge back that she did for her book launch live session on IG with Karan Johar, while out and about with BFF Malaika Arora.

Kate Middleton is a serial outfit repeater, as we have seen over the years, and she makes a strong statement for the fact that ‘the most sustainable dress is the one that is already in your wardrobe’. This year, at the Earthshot Prize Awards, the Duchess of Cambridge rewore her lovely Alexander McQueen gown in lilac. She was earlier spotted in the gown in 2011 at the Bafta Gala in Los Angeles.

Gwyneth Paltrow‘s iconic red velvet suit made a comeback this year at the Gucci Love Parade that she wore in 1996 when Tom Ford was the Italian fashion giant’s creative director. As Paltrow wrote in her Instagram caption, “Beautiful tailoring never goes out of style.” Her red velvet suit at the Gucci Parade was made by Gucci’s present creative director, Alessandro Michele.

There’s more proof that there’s one constant in style chameleon Lady Gaga‘s fashion evolution through the years — her Pleaser vegan leather boots in black that she has worn and re-worn multiple times. They were seen during the House of Gucci promotion tour, the Met Gala wherein Gaga changed outfits four times in a 15 minute performance, all in Brandon Maxwell.

Kareena Kapoor Khan has an expansive collection of kaftans, and this particular yellow and black printed number from Masaba Gupta seems to be one of her favourites. Bebo rewore this roomy, comfy kaftan while pregnant with her second son Jeh for a private dinner with friends and her sister Karisma Kapoor.

The first lady of the United States, Dr Jill Biden loves her blue floral Oscar de la Renta dress that she has worn on multiple occasions. But this year, she seems to have had a new favourite — another Oscar de la Renta floral number, but in a dark greenish-blue colour that she wore on the cover of Vogue magazine as well as during a vaccination tour in Georgia earlier this year and at the Children’s National Hospital on Christmas.

Are The Spices In Your Pantry Safe For Consumption? Check With These Simple Tests