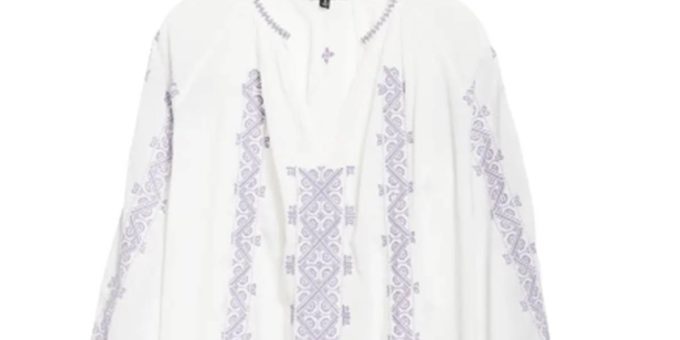 In an Instagram post, fashion watchdog Diet Prada mentioned that the ‘Anna’ top on Lotan’s own website describes the garment as a “stunning, airy top” that “radiates femininity” but “has no mention of any Palestinian origin, though other items like the ‘Abby Romanian Embroidered Top’ seem to indicate the garment’s inspiration.”

The embroidery on Lotan’s top also resembles the cross-stitch motifs on the traditional Palestinian thobe, an embroidered ankle-length handmade garment worn by Palestinian women since the 11th century.

In fact, the embroidery became a symbol of protest against Israeli occupation, Diet Prada pointed out. “During the First Intifada in the late 1980s, the thobe took on new meaning as embroidery became a tool of protest to Israeli occupation, which banned the display of Palestinian colors in public, among other oppressive actions. Women in the West Bank began making ‘Intifada dresses,’ incorporating political imagery and the thobe ultimately became a unifying symbol of resistance and cultural identity,” mentioned the official Instagram handle.

@Nordstrom please tell me this is a joke, an Israeli designer selling a top marketed as Palestinian for clout and you guys stand behind this? pic.twitter.com/UBJVPI2bjh

This is called cultural appropriation! @Nordstrom a terrible fail on your part & you really dare to call it Palestinian when you don’t even acknowledge their right to exist #Nordstrom #culturalappropriation #ApartheidIsrael #Apartheid #SaveSheikhJarrah #SaveSilwan #FreePalestine pic.twitter.com/JXRjP9ahtp

England vs New Zealand: Kane Williamson Ruled Out Of 2nd Test Against England