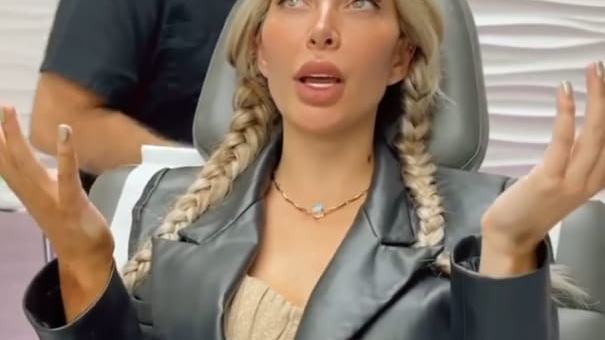 Farrah Abraham is teasing a “Books and Botox” event to help promote her new project.


Yes, Farrah has written a memoir-slash-self-help book (as if her ridiculous political ambitions weren’t enough).


Given who she is, she is already counting her eggs before they hatch.


Farrah is boasting to the world that she will soon be a “New York Times best selling author.”


Farrah Abraham shared a video and a caption to menace followers about her upcoming book.


“By the way, I talk about some really juicy stuff in my memoir, self-help,” Farrah shared.


“I mean how are you going to learn without some crazy examples I went through,” she added.


Farrah then instructed her followers: “So keep your eye out!”


During the video, Farrah also received an injection of Botox.


While there is certainly nothing wrong with injectibles, it is an unusual book promotional tactic.


Having turned 30 a little over a week ago, Farrah has high hopes for her book.


She claims taht it might take readers who are in theri twenties to “another level.”


Only Farrah knows what that is supposed to mean.


“Hope your 20 x more successful then me,” Farrah wrote, using the wrong you’re and the wrong than.


“You truly deserve your dream twenties or a dream decade!” she added.


“Stay blessed & see you soon on your in late June!” Farrah threatened. “Lots of fun ahead!”


As you can imagine, commenters across social media had glowing praises for the failed Teen Mom star.


Commenters were absolutely scathing about every aspect of this.


“You need to help yourself before you attempt to help others,” one follower recommended.


That is almost diplomatic when compared to many of the other comments.


“The only reason you were a NY times best selling author is bc people couldn’t wait to read that joke of a book,” wrote another.


That commenter emphasized: “NOT, I REPEAT, NOT because you’re a good author.”


Not inaccurately, the commenter added: “You literally can’t construct a proper sentence.”


“A best-selling author who doesn’t know the difference between your and you’re. Ugh,” lamented another.


Obviously, we all make typos every day, particularly when we write a lot and very quickly (like on social media).


But it was a reminder that Farrah’s struggles with spoken and written language go much further than that.


“She’s writing a self help book,” mocked a commenter.


The non-fan pointed out: “She is the LAST person anyone should be taking advice from.”


Dream Twenties is somehow a memoir, a self-help book, and also “business,” according to Farrah.


We’re not sure why anyone would want to get business tips from a racist “serial entrepreneur,” but apparently the book is full of them.


Still, we’re sure that morbid curiosity will get Farrah the sales and attention that she craves.

Rashmika Mandanna shares a life lesson with her fans