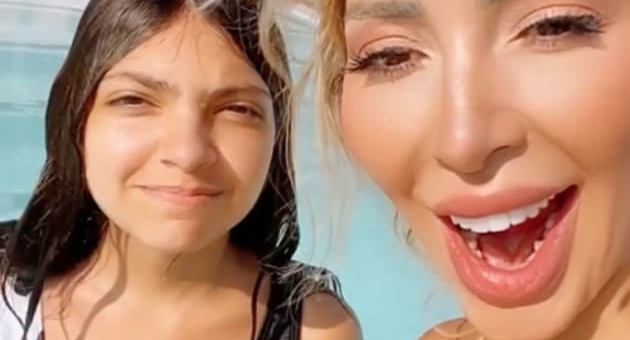 A great villain can be a wonderful thing for a reality show.


But that’s only true up to a certain point.


Eventually, viewers will get fed up with the bad guys’ shenanigans, which might lead them to lose interest in the show altogether.


It’s a lesson that MTV is currently learning the hard way thanks to one of the OG villains of reality TV, Farrah Abraham.


Farrah made her debut on Teen Mom Family: Reunion this week, and no doubt producers and MTV execs were expecting her to deliver a major ratings boost.


After all, these are the same folks who fired Farrah back in 2017.


They knew that bringing her back would be a massive headache, but they figured that Ms. Abraham would be worth the trouble.


Oh, how wrong they were.


Farrah’s return to the franchise that made her famous was clearly not the event that her bosses were hoping for.


In fact, despite heavy promotion on social media from the show’s stars, Farrah’s debut episode was the show’s lowest-rated to date.


And the numbers are low enough to make you wonder if any of the Moms have a future on television.


According to The Ashley’s Reality Roundup, the episode — aptly titled “The Return of Farrah” — pulled in a paltry 381,000 viewers.


The show ranked 28th for the night’s original telecasts — and this was on a random Tuesday in February with relatively little competition.


For context, the previous episode of TMFR brought in 470,000 viewers and was ranked 19th for the night.


Every long-running show suffers from a phenomenon known as “viewer erosion,” but Teen Mom producers hoped to combat that with a spin-off that they hoped would breathe new life into the franchise.


And for a while, it appeared to be working.


So is Farrah the problem?


Well, there’s a very good chance that she’s at least one major cause of the drop-off.


There was a time when the chance to check in on someone like Farrah would have amounted to a trainwreck that few fans could resist gawking at.


But in the age of Instagram, anyone can find out what’s up with Farrah at any time.


And these days, it seems like most of her comments are from hate-followers, who would have zero interest in tuning into a new show just because Farrah is involved.


We can’t say we blame them.


While many formerly messy reality stars might be able to leave their pasts behind them as they mature, Farrah seems to be getting worse with age.


And these days, her most reprehensible behavior involves the exploitation of her daughter, 12-year-old Sophia.


The relationship between these two has always been highly inappropriate, as Farrah often seems more interested in being Sophia’s bestie than her mom.


These days, Farrah is also trying to turn her daughter into a business partner — whether Sophia likes it or not.


The latest example of this practice is especially gross — and we’d like to warn you not to read any further if you’re currently eating.


Farrah has started selling her own brand of “poop slime” on Sophia’s website.


The item, which retails for $9, is being marketed as a toy — but as you might have guessed, most commenters don’t think there’s anything fun about it.


“Just when you think Farrah can’t sink lower, she does this,” one person remarked, according to UK tabloid The Sun.


“This is wrong on so many levels. Why does Sophia even have merch? Who is the target market?” another person asked.


“Holy hell this is so inappropriate. She has no boundaries. Save Sophia,” a third added.


“I’m speechless. This is disgusting,” a fourth chimed in.


So it seems like Farrah has disgusted quite a few people this week:


There are the folks who visited her daughter’s website — and then there are the execs who were hoping she could rescue the Teen Mom franchise.


All in a day’s work for one of reality TV’s most nefarious villains!