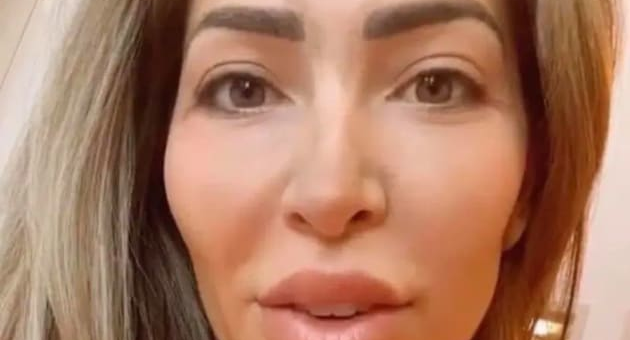 In a recent interview, Farrah Abraham vowed to postpone all of her scheduled cosmetic procedures until after the coronavirus pandemic had subsided.


And now, we don’t know what’s harder to believe — that anyone is still interested in interviewing Farrah Abraham, or that the fired Teen Mom star was unable to go even a few weeks without paying someone to stick a needle in her face.


Or maybe those aren’t even the most shocking things about this story:


After all, it’s pretty freakin’ alarming that Farrah is apparently in the habit of bringing her daughter along on her botox appointments.


But none of these matters have earned as much attention online as this simple but important question:


Why the hell can’t Farrah afford to have better work done?


The above photo shows the end result of Farrah’s latest appointment, and … yeah, she looks more like someone who went 12 rounds with Floyd Mayweather than someone who paid to have that done to her.


Granted, the situation probably improved after the swelling went down, but that leaves us wondering why Farrah would share this “after” selfie with the world instead of just waiting a few hours.


We know she loves attention, but she had to know her followers would relentlessly roast her for that pic.


And of course, that’s exactly what happened.


In a Reddit forum devoted to discussion of all things Farrah, the pic blew up almost immediately … but probably not in the way that Farrah would have hoped.


“She looks truly unrecognizable… if y’all didn’t post this on THIS particular forum, I wouldn’t know who the hell this is!” one person wrote.


“She looks so much older than she should. Plastic surgery should turn back the clock a bit, not fast forward it!” a second remarked.


“WHO IS THAT?…oh wait, it’s Farrah,” a third, incredulous commenter chimed in.


Obviously, Farrah and plastic surgery have a long, long history together, and she’s never been shy about flaunting her results.


In fact, the Botox doc she went to this week is the same miracle worker that performed Farrah’s vaginal rejuvenation.


But this time is different for a few reasons:


For one, Farrah tried to BS her followers and claim that she was having work done because of headaches and lockjaw.


Needless to say, no one believed her.


On top of that, Farrah decided to bring her 11-year-old daughter Sophia with her.


Farrah has made a whole lot of questionable parenting decisions over the years, and bringing her child to witness a cosmetic procedure that’s also being broadcast on Instagram Live doesn’t even crack the top 1,000 in terms of awfulness.


And the third reason these pics are getting so much attention is that some fans are now convinced that Farrah has been undergoing cut-rate cosmetic work from the very beginning.


Does this mean that the rumors about Farrah being broke are true?


Maybe … but as long as she’s able to grab some quick attention with a stunt like this, she’ll probably be able to pay the bills.

Bollywood’s couple guide for getting through quarantine