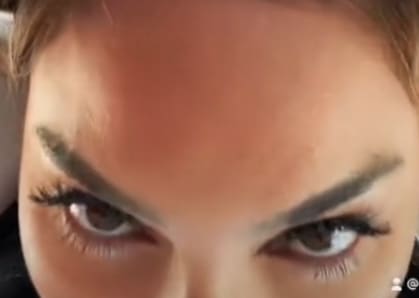 
While many question Farrah’s parenting choices, Sophia is not the only one sporting a new look.


Farrah, ever the fan of altering her body and style, has undergone yet another transformation.


And she looks positively unrecognizable.


The 30-year-old mother and nightmare of a human being is an avid user of TikTok.


The video-based social media app particularly popular with teens is the venue that she selected to flaunt her new hair.


Farrah didn’t just show off the results. She also shared her “journey” to get there.


She followed that up with a wash.


Only then did viewers get a look at the process of adding in the extensions.


Finally, she showed off the look at the end of the process.


Notably, she did not do this herself, but underwent it at a salon.


That’s the correct way to do things — it is so easy to damage hair. With long hair, it can last for years.


During the video, Farrah lip synced to a scene from Barbie: Life in the Dreamhouse.


We have to wonder about the logistics of a compilation video like this one involving lipsyncing and another person.


Did she just remember what to mouth and when … or did she make this poor stylist listen to the same clip over and over while recording?


For the stylist’s sake, we would love to assume that Farrah did the courteous thing and just mouthed silently into her phone camera.


(To imagine this, we need only ignore all past evidence about her behavior and how she treats other people)


Apparently, Farrah’s new hair was at least in part preparation for a new photo shoot that took place in Morocco.


Yes, for whatever reason, Farrah’s status as a public figure continues to secure her work.


Say what you will about her (and we will), she certainly is famous.


(I mean, hey, we’re talking about her, and we wouldn’t be if a whole bunch of other people weren’t, too)


Some fans were immediately reminded of Farrah’s daughter, Sophia.


Obviously, 12-year-olds are not the masters of their own lives or destinies.


Only after Sophia asked did Farrah agree to allow her to go to actual school again … eventually.


But what made fans and critics alike think of Sophia is that Sophia was recently sporting different hair.


Yes, that’s a perfectly age-appropriate thing to do on its own. Tweens try out different looks.


And as weirded out as we fuddy-duddies might feel at the sight of her in a crop top, that’s not that unusual of an outfit at 12.


At least, not to try on around the house. It’d be a little odd to wear to go out to eat.


But what made followers concerned is how much Farrah seems to be grooming Sophia to follow in her footsteps.


After all, Farrah does and reveals these transformations all of the time. Now she’s showcasing her daughter doing it.


More alarming was when Farrah was exposed filtering Sophia’s photos.


Using social media filters can be devastating to vulnerable self esteems, like those of basically any middle schooler.


For Sophia’s own mother to filter her look … that’s just weird. So much of what Farrah does is just plain weird.