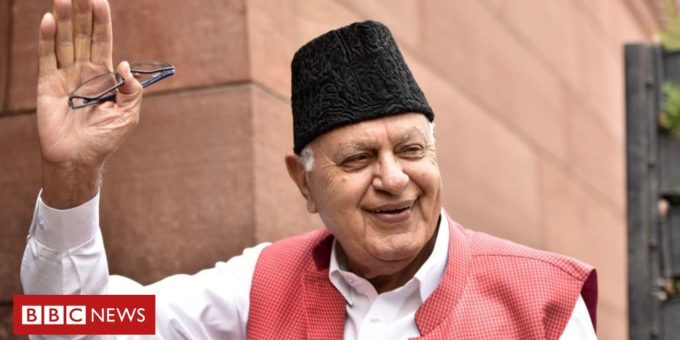 Indian authorities have announced the release of a veteran Kashmiri MP and former chief minister who had been in detention for seven months.

The order did not give any reason for Farooq Abdullah’s release.

He said he was “grateful” to all those who fought for his freedom, and called for the release of other detainees.

He was among thousands of local leaders put under house arrest a day before the disputed region was stripped of its semi-autonomous status in August.

The government deployed tens of thousands of troops to quell unrest and enforced a crackdown on communications.

Mr Abdullah’s detention under the controversial Public Safety Act (PSA) had generated debate, especially as he is an MP. Days ago, eight opposition parties wrote a letter to the government, demanding his release along with other Kashmiri leaders.

The joint resolution warned that “democratic dissent is being muzzled” in the state.

Thousands of others, including political party workers, activists and lawyers are also in custody, with many taken to jails in cities outside the region.

The government said the move, decried by critics as draconian, was necessary to maintain law and public order in the region. It also moved to block internet and mobile connectivity in the region – these have only been partially restored.

A five-time chief minister of Indian-administered Kashmir, Mr Abdullah was widely considered to be a “pro-India” politician in the state.

Both India and Pakistan claim the region in its entirety, but control only parts of it.

When he was first placed under house arrest, MPs demanded an explanation as the procedure is to inform parliament if a member of the house is to be arrested.

This prompted Home Minister Amit Shah to tell the house that Mr Abdullah was “not detained or arrested”.

In one of his last public interviews since then, Mr Abdullah gave an emotional television interview where he accused Mr Shah of lying.

“Why would I stay inside my house on my own will when my state is being burnt, when my people are being executed in jails? This is not the India I believe in,” he said.