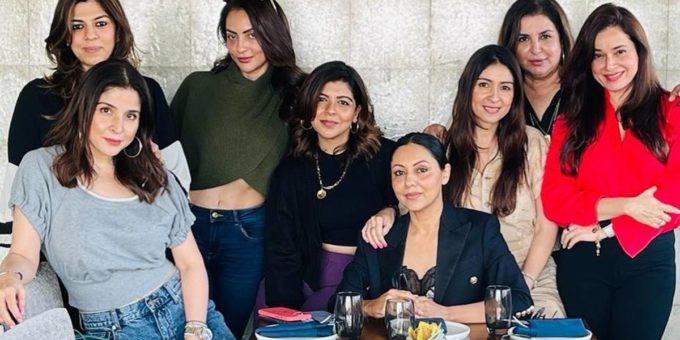 Farah Khan gave a glimpse of her all-women lunch get-together on Saturday, which was also attended by Shah Rukh Khan’s wife Gauri Khan. The choreographer-director shared a photo on her Instagram stories which also featured Maheep Kapoor, Neelam Kothari, Seema Khan, Pooja Dadlani and Bhavana Pandey among others.

Sharing the photo, Farah wrote, “Bollywood lunch with fabulous women.” Bhavana Pandey also called her friends “fabulous.” “The Bollywood wives are just as much fun off screen. Great food, great conversation and no gossip whatsoever,” Pooja Dadlani wrote as she shared the picture on her Instagram account. Later in the day, Seema Khan shared a selfie with Gauri Khan. She shared the picture on her Instagram stories and tagged Gauri as the “Lady don.”

Earlier this week, Gauri shared a set of photos, giving a sneak-peek of her new design. The producer-turned-interior designer had also featured in a couple of advertisements with Shah Rukh Khan. SRK, meanwhile, is set to be seen in Pathan, a YRF film directed by Siddharth Anand.

A source conveyed to ET Times that SRK plans to complete the filming for Pathan soon, after a few foreign shoots. He will then resume shooting for his film with Atlee, which has been pending for a while.

Farah Khan has been treating fans to fun videos featuring Karan Johar. The two had also recreated an iconic Kabhi Khushi Kabhi Gham scene when the film completed 20 years of its release in December.

Meanwhile, Maheep Kapoor, Neelam Kothari, Seema Khan and Bhavana Pandey are set to return for the second season of Fabulous Lives of Bollywood Wives. The series will stream on Netflix.

Masks to be compulsory in vast majority of French workplaces: Government
2020-08-18