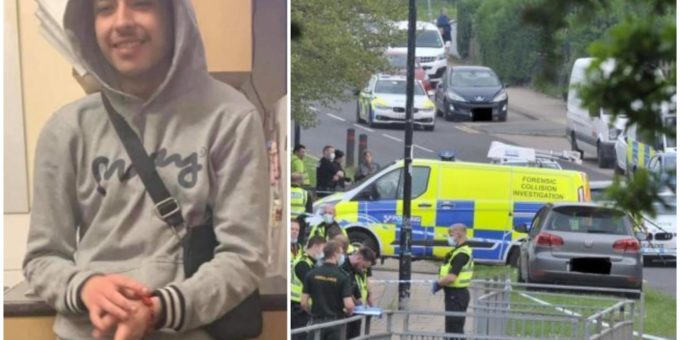 THE family of a teenager who died after a crash involving a quad-bike and a car last week have spoken of their “total devastation” after their house was “deliberately damaged” just days after their son’s death.

West Yorkshire Police was called to the scene at 4.09pm and found Mr Mahmood, who had been a passenger on the quad-bike, with a serious head injury.

He was pronounced dead at the scene.

A murder investigation was launched on Friday.

Mr Mahmood’s family have pleaded for peace to mourn the death of their son, after the family home, in Holme Wood, was attacked on Saturday morning (June 5).

A window at the address was smashed, but there was nobody at home.

Mr Mahmood’s family released the first official photo of their son today, alongside a statement.

It said: “Everyone that knew Rahees is in total devastation.

“We are trying to mourn his death and ask for peace to do so and the mindless behaviour to stop.

“Rahees had a heart of gold and was loved by everyone that knew him.

“This shows in our community by the way everyone is pulling together and going above and beyond to do fundraising in his name.

“We thank everyone for their kindness and support in this tragic time.

“It is a big help to know that he was loved and respected in abundance.”

Detective Chief Inspector Nicholson said: “It is disgraceful that a family still mourning the death of their young son, are having to put up with damage being caused to their property just days after his life was cruelly taken.

“We believe the attack on the property was deliberate and are thankful that they were not at home when it occurred.

“I would ask anyone with information about who may have done this to contact the police, so action can be taken against those responsible.”

Police are also continuing to appeal for information in relation to the collision, after officers made two new arrests yesterday as part of the murder investigation.

It means the force has detained six people in total so far.

The other vehicle involved in the collision is believed to be a silver Ford Focus.

The driver of the quad-bike, a 19-year-old male, was taken to hospital following the collision and remains in a serious yet stable condition.

Anyone with any information that could assist the murder investigation is asked to contact the Homicide and Major Enquiry Team via 101, or using the contact options on the West Yorkshire Police website.

Information, CCTV and video images which could assist enquiries can also be uploaded to the Major Incident Public Portal for Operation Parryfield here.

Information can also be passed to Crimestoppers anonymously online or on: 0800 555 111.