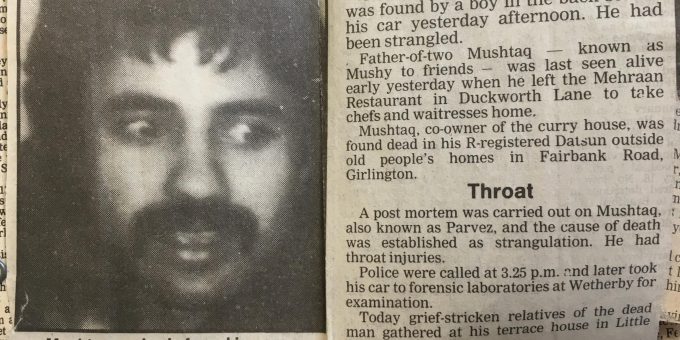 A RESTAURANT owner’s murder was a suspected ritual killing brought about by a family feud in Pakistan stretching back 30 years.

Parvez Akhtar, also known as Mustaq Hussain or ‘Mushy’, was found dead by his young cousin.

The father-of-one was last seen alive when he left the Mehraan Restaurant in Duckworth Lane, Bradford, to take chefs and waitresses home on January 12, 1986.

He was the co-owner of the restaurant and found dead in his Datsun car outside old people’s homes in Fairbank Road, Girlington.

“There was no bad feeling towards him.”

One motive detectives entertained was the theory Akhtar was the victim of a ritualistic killing brought about by a 30-year feud between two families in Pakistan.

Police came up with this after visiting the poverty-stricken hamlet of Jaral Klan in Northern Pakistan in the summer of 1986.

They discovered the trouble began in the village in the mid 1950s – five years before Akhtar’s birth – with a dispute between his family and another in the village over a “problem marriage.”

More disputes over land and property in the village led to violent clashes on the dusty streets.

In 1976 he left to come to England , entering the country under the name of Hussain and finding shelter with an Asian family in Halifax.

He later moved to Bradford where he married, had two children and bought a share in the Mehraan restaurant in Duckworth Lane.

Meanwhile, the violence in his home village continued and the row came to a head around the Pakistan elections of 1985.

It is known that the head of the rival family was degraded by having his face pushed into an open street sewer.

According to the head of Bradford CID Detective Chief Superintendent Kevin Cooper, it was that which led to the murder 5,000 miles away in Bradford.

Speaking to the Telegraph & Argus in 1987, Mr Cooper said: “It would have been a way of getting at Akhtar’s father.

“It looked as if it was a planned killing as opposed to a spur-of-the-moment murder.

“The fact that his throat was cut after he had been strangled to death indicated that it was a ritual killing.”

A Force spokesman said: “West Yorkshire Police has a dedicated team of detectives who carry out reviews of these investigations in line with new evidence coming to light or advances in forensic technology.

“If you have information which may assist, then please contact the Major Investigation Review Team on 101 or by using the contact options on the West Yorkshire Police website.

“Information can also be reported anonymously to the independent charity Crimestoppers on 0800 555111.”