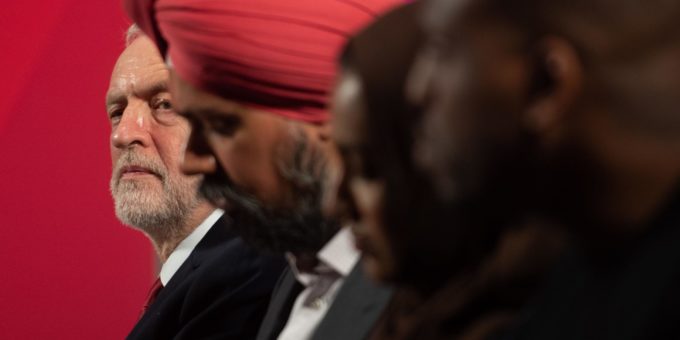 Faith groups gave a mixed response to comments made by the Chief Rabbi in attacking Jeremy Corbyn.

The Chief Rabbi’s unprecedented intervention that Jeremy Corbyn is unfit to lead the nation over his handling of anti-Semitism was made to coincide with Labour’s launch of its equality at his faith and race manifesto in Tottenham, north London.

Faith organisations pointed out warned how race and religion was being politicised for election purposes whilst the Hindu Council of the UK backed the Rabbi’s comments.

Bhai Amrik Singh, the Chair of the Sikh Federation (UK) responding to comments by Ephraim Mirvis, the Chief Rabbi in The Times said, “Racism and discrimination are a massive challenge for all political parties and all of them need to do much more.  However, there is far too much emphasis on Anti-Semitism and Islamophobia as both terms have become politicised.”

“Sometimes it appears the political elite and establishment regard the Jewish and Muslim communities as having a monopoly when it comes to racism and discrimination and others like Sikhs are overlooked time and again.”

“Sikhs are the most visible minority community across the globe and Sikhs and our religious institutions have been attacked and a number of Sikhs killed through what has popularly become known as “mistaken identity”.

“Section 4 of the Sikh Manifesto that was launched last week tackles this head on and should be a wake-up call to politicians serious about tackling all forms of xenophobia.”

“The Chief Rabbi is using over dramatic language to attack the Labour movement and this is as disturbing as foreign governments like India, led by right wing Hindu fanatics asking voters in the UK to vote for the Conservatives due to narrow perspectives about Kashmir or targeting specific Labour MPs.

“As an organisation the Sikh Federation (UK) encourage Sikhs to vote for the best local candidate and not back any particular party.  Although nationally we look to political parties to clarify their approach to specific community concerns set out in the Sikh Manifesto.”

The comments come after a period when The Labour Party spoke out against the Indian Government’s decision to revoke Kashmir.’s sepcial status earlier this year.

Anil Bhanot, the Hindu Council’s director for interfaith relations is reported as saying: ‘It is a sad state of affairs that a major political party in our country which used to be a progressive socialist voice has veered towards what is almost a fascist ideology.’

Bhanot also wrote a letter to the Jewish Rabbi supporting his intervention. In his letter, he said, “Labour has increasingly become anti-Semitic and anti-Hindu”.

The Muslim Council of Britain said of the Chief Rabbi’s comments yesterday, “Today’s statement by the Chief Rabbi highlights the real fear many British Jews have, regarding the unacceptable presence of anti-semitism in Britain and in politics today. Racism wherever it comes from – whether from the left or the right – is unacceptable, and not enough is being done. We agree with the Chief Rabbi’s observation that ‘some politicians have shown courage but too many have sat silent.”

On the broader question of the Conservative Party’s Islamophobia, a spokesperson for the MCB said, “Muslims are a diverse community and realise different Muslims will make up their own minds on who to vote for. But the way that the Chief Rabbi had shared his experiences and insights, has highlighted the importance of speaking out on the racism we face, whilst maintaining our non-partisan stance.

“British Muslims – whilst from the most disadvantaged communities and rarely allowed a voice in the public space – will listen to the Chief Rabbi and agree on the importance of voting with their conscience.”