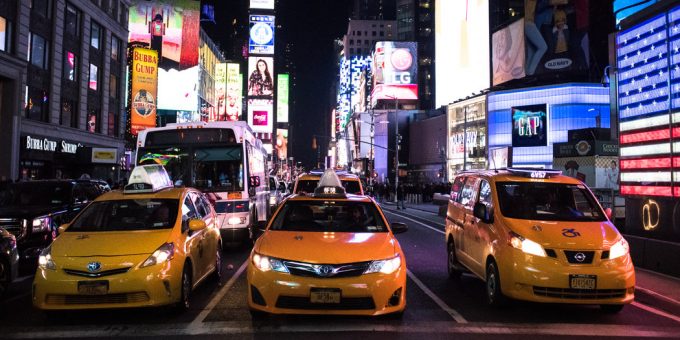 [What you need to know to start the day: Get New York Today in your inbox.]

For more than a decade, New York City officials stood by while thousands of cabdrivers became mired in reckless loans that saddled them with debt they could not afford and helped lead to a near-collapse of the industry.

On Wednesday, Corey Johnson, the speaker of the City Council, unveiled a package of bills aimed at preventing that from happening again. The Council, responding to an investigation in The New York Times, also plans to hold a hearing later this month to examine the city’s role in the crisis that devastated a generation of cabbies.

“It’s clear that we need to take legislative action to protect medallion owners and drivers from predatory actors, including lenders, medallion brokers and fleet managers,” said Mr. Johnson, a Democrat.

At the same time, Mayor Bill de Blasio announced a separate set of initiatives: The city is eliminating as much as $10 million in fees to taxi medallion owners, and drivers will be able to obtain financial counseling from a new “driver assistance center.”

The mayor, a Democrat who is running for president, also said on Wednesday that he would extend the city moratorium on approving additional vehicles from ride-hailing services such as Uber and Lyft for another year. The city would also impose limits on how long the for-hire cars can linger in Manhattan without passengers.

Taken together, the efforts represent the city’s first concrete steps to address a lending crisis that has led to financial ruin for drivers. But they did little to rescue the thousands of taxi drivers struggling with deep debt after buying a medallion, the city permit that allows drivers to operate a cab.

“We need to do much more,” said Bhairavi Desai, the leader of the Taxi Workers Alliance, which represents individual medallion owners as well as fleet drivers. “There’s a recognition that it will take some time to get there. But that process needs to begin immediately.”

Ms. Desai said she appreciated the efforts but urged the city to take more drastic action, such as bailing out drivers already in debt, or pressuring banks to soften loan terms.

The announcements came after The Times’s two-part investigation revealed that over more than a decade, taxi industry leaders had created a financial bubble in the medallion market.

[Read Part 1 of The Times’s investigation: “How Reckless Loans Devastated a Generation of Taxi Drivers.” Here is Part 2: “As Thousands of Taxi Drivers Were Trapped in Loans, Top Officials Counted the Money.”]

In practices similar to those in the housing market bubble, the taxi industry leaders helped to artificially inflate medallion prices to $1 million in 2014 from $200,000 in 2002, and made hundreds of millions of dollars by channeling purchasers into loans that many could not afford under exploitative terms.

The investigation also found government regulators ignored warnings from their own staffers, while the city went even further, selling taxi medallions and running ads promoting them as “better than the stock market.”

When the bubble burst and prices crashed in late 2014, the government largely abandoned cabbies; more than 950 have filed for bankruptcy and thousands more struggle to survive, The Times found.

Ms. Desai said her group has resorted to setting up fund-raising pages for the public to donate to some of the drivers affected by the crisis.

The city Taxi and Limousine Commission, which regulates yellow cabs, declined to comment on the Council’s plan. Agency officials have previously said that they did not have the power to regulate lending practices and that they could not have foreseen that Uber and Lyft would emerge to undercut the industry.

A spokeswoman for Uber, Alix Anfang, criticized Mr. de Blasio’s proposal to extend the moratorium, which was set to end in August. The T.L.C. will review the cap each year and have the option to adjust it, the mayor said.

“The mayor’s cap will create another medallion system, the same kind that bankrupted drivers and enriched lenders,” Ms. Anfang said.

Uber sued the city in February to overturn the cap. The suit is pending.

The day after the investigation appeared in The Times, the New York attorney general, Letitia James, opened an inquiry into the lending practices, and Mr. de Blasio ordered an investigation of medallion brokers. Those reviews are ongoing.

The City Council legislation is being spearheaded by Mr. Johnson, the speaker, as well as Councilman Ritchie Torres of the Bronx, who leads the Council’s oversight and investigations committee. That committee will hold a joint hearing with the Council’s transportation committee on June 24, officials said.

“I look forward to questioning the Taxi and Limousine Commission about its role in the crisis,” Mr. Torres said. “Not only did it fail to protect medallion owners from predatory forces, it was one of the predatory forces. There’s a sense in which the T.L.C. was a speculator masquerading as a regulator.”

One of the measures before the Council requires T.L.C. officials to scrutinize the financial resources of medallion buyers, and block sales that involve unaffordable loans. The city would also ban the use of so-called confessions of judgment in medallion loans. Many drivers had signed those documents, in which borrowers admit defaulting on a loan and authorize a bank to do whatever it wants to collect.

The city legislation would also direct the T.L.C. to create an Office of Financial Stability to monitor the health of the industry, collect disclosures from medallion owners and assess the integrity of medallion brokers and fleet owners.

Several members of the Council said they supported the legislation but wanted the city to find a way to bail out the owners already in debt. Three councilmen — Mark Levine, Stephen Levin and Brad Lander, all Democrats — said they were researching a bill to do that.

A spokeswoman for the mayor said he was supportive of Mr. Torres’s legislation.

The “driver assistance center,” which was first proposed by the Council last year but was never created, would connect cabbies with counseling and food stamps and other benefits, according to the people familiar with the plans.

The fee waiver would aid all owners of the city’s 13,500 taxi medallions, including large fleets, which operate about half of cabs. It would exempt them from paying $1,100 renewal fees due this year or next. The Council is already pushing to make the waiver permanent.

In Albany, the articles in The Times have also led to renewed interest in three pieces of long-stalled legislation that would address protections for business loans.

One of the bills would improve disclosure rules for those types of loans, while another would outlaw deceptive business practices. A third would ban confessions of judgment.

Proponents are hoping to pass the bills before the legislative session ends next week, although none have yet been passed by either chamber of the Legislature.

“Well, we have to give everything we’ve got for the next two weeks,” said Assemblywoman Yuh-Line Niou of Manhattan, a sponsor of two of the bills.