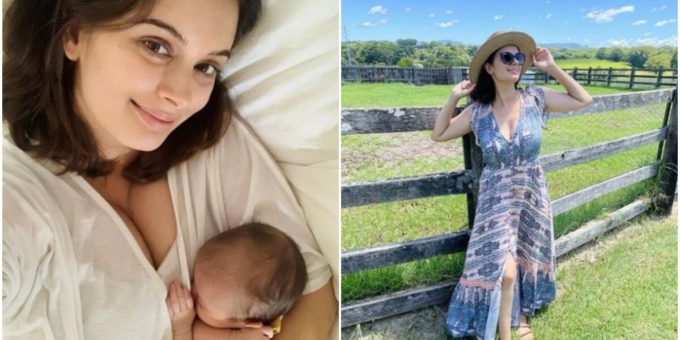 Yeh Jawaani Hai Deewani actor Evelyn Sharma responded to the backlash she received for recently posting a picture of herself, breastfeeding her two-month-old daughter Ava Bhindi. She said in a new interview that all she wanted to do was to let new mothers know that they ‘aren’t alone’.

Evelyn told Hindustan Times, “Such images show vulnerability and strength at the same time. I find it beautiful. Breastfeeding is one of the most natural and healthy things to do. And it really is why women have breasts in the first place. So why be shy about it?”

The picture in question was posted by Evelyn on Instagram last week, and it isn’t the first time that she has shared a breastfeeding picture online. She added, “Breastfeeding is much tougher than people think. When you start out as a new mum, it is often physically and mentally exhausting, particularly cluster feeds. I shared my story to let mums out there know that they aren’t alone in this.”

Evelyn and her husband Tushaan Bhindi welcomed Ava last year. Evelyn, who hosts a podcast on the Indian Express, said that she considers herself to be ‘more Indian’ than her Gujarati origin husband. “My husband is, technically Gujarati, he’s from Sydney, Australia. I’m Punjabi German but I feel more Indian than him as I lived in India for 10 years. I’ve travelled so much that I’ve seen so many cultures. We have these mixed cultures in our marriage, and so we’re establishing our own rules,” she said.

Co-produced by Indian Express and DW (Deutsche Welle), the podcast discusses relationships, sex, and everything else that impacts people’s lives. You can listen to it here.