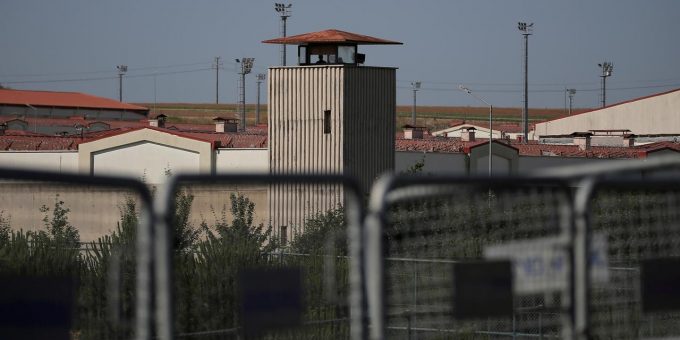 ISTANBUL: Prison conditions and police brutality in Turkey have been criticized by the Council of Europe’s Committee for the Prevention of Torture (CPT).

Overcrowding in prisons prompted the Turkish government to adopt an amnesty law in April that led to the release of 90,000 inmates — including mafia bosses — but not those convicted on terror charges.

However, the problem has persisted with a steady increase in the prison population, according to two CPT reports, released on Aug. 5.

The criticisms by the European body are based on its periodic visits to several prisons throughout the country and on interviews with hundreds of people who were held in police custody.

The European delegation examined several personal testimonies about excessive use of force and physical ill-treatment by gendarmerie officers and police forces during custody. Former detainees said that they were kicked, punched and slapped by police who wanted them to provide more information or give confessions.

“Numerous detained persons claimed to have been subjected to threats and/or severe verbal abuse. Moreover, a number of allegations were once again received about excessive use of force and/or physical ill-treatment by members of the mobile motorcycle intervention teams in Istanbul,” the report said.

“In a number of cases, the allegations of physical ill-treatment were supported by medical evidence, such as bodily injuries documented in medical records or directly observed by medical members of the delegation,” the report added.

The Council of Europe reiterated its call to the Turkish government to implement its “zero tolerance policy to the ill-treatment” and to alleviate concerns about legal restrictions on access to a lawyer during the initial phase of police custody for certain serious crimes.

“So far, only CPT and the ministry are entitled to inspect the prisons’ physical conditions, undermining transparency and preventing immediate precautions during the pandemic conditions,” he told Arab News.

Another area of criticism is the flawed system of mandatory medical examinations for newly arrived prisoners, as well as the lack of beds for a large number of inmates in the prisons — obliging them to sleep on mattresses on the floor due to overcrowding.

Philanthropist, businessperson and human rights activist, Osman Kavala, recently marked his 1,000th day of imprisonment on July 27 although the Council of Europe has often called for his immediate release.

Last December, jailed Kurdish politician, Selahattin Demirtas, who has a history of coronary issues, was taken to hospital for health checks after collapsing in his prison cell. Family members claimed that the authorities refused to carry out full checks and detailed examinations for emergency treatment.

According to Turkdogan, prisons are still overpopulated as their capacity even with the planned construction of new facilities is only suitable to accommodate 165,000 inmates, while the current prison population is about 200,000.

“Those convicted for expressing their opinions, as well as juvenile inmates and thousands of children who stay with their mothers in the prison, should be released at first instance to alleviate this overpopulation problem. About 600 inmates who have serious illnesses should also be released,” he said.

Turkdogan said that allegations of torture should be investigated, and naked screening for inmates as well as handcuffed health monitoring practices should be stopped to protect the dignity of prisoners.

Some inmates, such as Demirtas who is in northwestern Edirne prison 1,600 km from his southeastern hometown Diyarbakir, are kept far from their families. Turkdogan said that this was also a violation of rights.

“They need to keep their contacts with their families. But when you put an inmate in a city situated miles away from the place of residence or from the city where the crime is committed, it complicates the lives of the relatives as well,” he said.

On the basis of photos, videos and legal and medical documents about the incidents examined, Human Rights Watch also released a report last week claiming that “Turkish police and “night watchmen” have committed serious abuses against at least 14 people in six incidents in Diyarbakir and Istanbul in the past two months.

Politicians from the pro-Kurdish Peoples’ Democratic Party (HDP) have regularly submitted written parliamentary questions regarding torture or ill-treatment in Turkey, but the questions mostly remain unanswered by the interior and justice ministries.