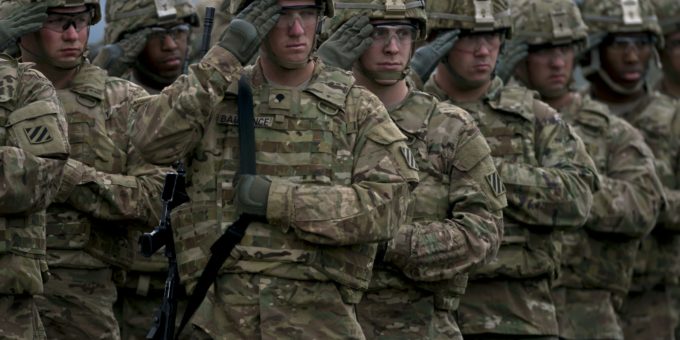 As crisis talks continue between U.S., Russian and NATO officials, Europe has been conspicuously absent from many last-ditch negotiations aimed at preventing tensions between Russia and Ukraine from spilling into conflict.

Western allies are preparing for some kind of military confrontation, with NATO putting more forces on standby and looking to reinforce Eastern Europe with more ships and fighter jets. The U.S. Department of Defense, meanwhile, said Monday that about 8,500 American troops are on heightened alert and awaiting orders to deploy to the region in the event that Russia does invade Ukraine.

Some analysts believe that Europe has been “sidelined on its own turf,” as Eurasia Group’s Emre Peker and Alex Brideau characterized the bloc’s lack of a decisive role in the talks.

“The EU has failed to unequivocally rally behind a strategy to counter Russia’s increasingly aggressive posture against Ukraine, and will struggle to do so going forward. That will relegate Brussels to the sidelines as the U.S. and Russia discuss the future of Europe’s security architecture,” they noted on Monday.

Several European officials have complained that the EU has been sidelined during discussions on Ukraine between the U.S. and Russian officials; Ukraine has also complained that it has also been left out of talks in which it is the central focus and concern.

But part of the European Union’s difficulties when it comes to dealing with its bellicose neighbor Russia is that there is division within the bloc over how to deal with Moscow. Some countries take a more dovish stance toward Russia (such as France and Germany), whereas others, such as those in Eastern Europe or those that used to be part of the Soviet Union like the Baltics, are more hawkish.

In addition, the EU has an awkward reliance on Russia for a large chunk (around 40%) of its natural gas supplies, meaning that Russia can use this resource, particularly in winter, to its own advantage. Germany in particular is in a difficult situation because the Nord Stream 2 gas pipeline, which is yet to be approved, will transport gas directly into Germany and is designed to boost Russian gas supplies to the continent.

Another part of the problem is that there is no consensus in the EU over its future security landscape. Some countries, like France, are pushing for more strategic autonomy from the U.S. and NATO, while others (again those in Eastern Europe and the Baltics where NATO troops are deployed) are more comfortable with remaining under the aegis of the military alliance.

“These dynamics will put yet another nail in the coffin of EU defense integration, and exacerbate the bloc’s split into pro-U.S. and more-Europe camps on security,” Peker and Brideau noted, effectively meaning that “U.S.-Russia talks will decide the future of Europe’s security architecture, which the EU will follow.”

Crisis talks between Western officials and Russia have been taking place for a number of weeks now, and follow high-profile discussions between U.S. President Joe Biden and his Russian counterpart Vladimir Putin.

Concerns over Russia’s behavior toward Ukraine grew amid reports that it had deployed around 100,000 troops and military hardware to various positions along its border with Ukraine. There have also been some intelligence reports that it is planning to invade.

Russia has denied these reports repeatedly.

In talks with the U.S. and NATO, Russia sought legal assurances that Ukraine will never be allowed to join NATO, as Putin seeks to stop any eastward expansion of the military organization, and pushes NATO to roll back deployments in Eastern Europe and the Baltics. So far, the U.S. and NATO have refused such demands, among others.

As Ukraine is not a member of NATO, the military alliance is not obliged to defend it, posing the question over just how far the U.S. and EU are willing to go to defend the country — one that aspires to both membership of the EU and NATO. Russia vehemently opposes these aspirations.

While the U.S., Europe and NATO have all talked tough when it comes to Russia, vowing “massive consequences” as U.S. State Secretary Antony Blinken said on Sunday, if Russia does invade, so far it looks like more sanctions on key Russian sectors would be the primary response deployed by the international community.

While the U.S. and U.K. have sent military equipment to Ukraine to help it defend itself, the response from EU nations has been more nuanced — Germany has refused to provide Ukraine with direct military support and reportedly blocked Estonia from sending German-made weapons to Ukraine.

NATO has itself been bolstering its military capabilities in Eastern Europe by putting forces on standby and deploying more ships and fighter jets to the area. Some European countries, including Spain, Denmark and the Netherlands, have announced their intention to send military hardware to bolster NATO defense capabilities.

Mariana, 52, a marketing researcher who for the past two years has been a volunteer in a Kyiv Territorial Defence unit, trains on a Saturday in a forest on January 22, 2022 in Kyiv, Ukraine.

The Kremlin accused the U.S. and its allies on Monday of escalating East-West tensions by announcing plans to boost NATO forces and the U.S.’ decision to evacuate the families of diplomats from its embassy in Ukraine.

The EU said on Monday that it will continue to stand by Ukraine’s side and, despite preparations for conflict, diplomats in Europe continue to push for peace.

A flurry of diplomatic meetings has continued in the region this week, with the EU’s Foreign Affairs Council meeting on Monday and NATO Secretary General Jens Stoltenberg holding talks with foreign affairs ministers from Finland and Sweden.

On Monday afternoon, Biden held a video call with a number of European leaders and NATO chief Stoltenberg.

In a statement, the European Commission said the meeting “aimed at coordinating the collective response to the aggressive behaviour of Russia with regards to Ukraine. Leaders shared the assessment on the seriousness of the situation. They wished for diplomacy to succeed but are undertaking preparations for all eventualities.”

It added that it was “working on a wide array of sectoral and individual sanctions in the case of further military aggression by Russia against Ukraine,” as well as working with EU states and allies on preparedness, from energy to cyber-security.

On Monday, the EU announced a new financial aid package for Ukraine of 1.2 billion euros ($1.36 billion) in the form of an emergency financial assistance package and 120 million euros in additional grants. European Commission President Von der Leyen said the aid was aimed at helping Ukraine “address its financing needs due to the conflict,” adding: “Let me be clear once more: Ukraine is a free and sovereign country. It makes its own choices. The EU will continue to stand by its side.”

European leaders are also looking to try their hand at bringing Russia and Ukraine closer together this week, with political advisors from Russia, Ukraine, France and Germany due to hold “Normandy format” talks on eastern Ukraine in Paris on Tuesday or Wednesday.

Such talks have in the past produced the so-called ‘Minsk Agreements’ — peace deals to stop the ongoing lower-level conflict in eastern Ukraine — but the accords did not stop ongoing skirmishes and some fighting in the Donbass region between pro-Russian separatists and Ukrainian troops, and both sides have accused the other of flouting the agreements.

As such, there is not much expectation that the Normandy talks will be fruitful. Timothy Ash, senior emerging markets sovereign strategist at Bluebay Asset Management, said that “Normandy and Minsk processes are dead,” with Moscow showing what he said was “zero interest” in the peace talks continuing.

From sun dogs to snowpack, we answer some of your weather questions