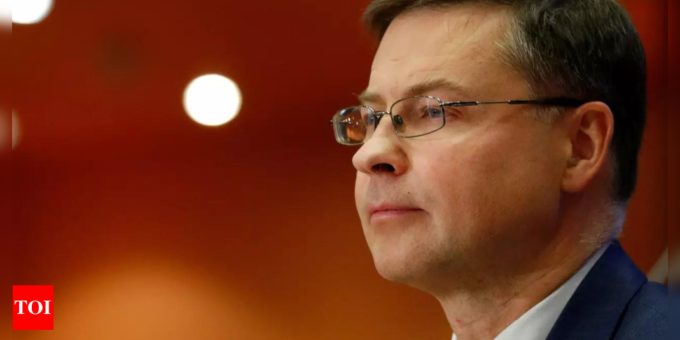 NEUHARDENBERG: The European Union is prepared to extend a suspension of import duties on Ukrainian products, the bloc’s trade commissioner said Thursday, seeking to support the country’s hard-hit economy following Russia’s invasion.
“If the situation required it, we would be ready to extend” it, Valdis Dombrovskis told AFP in an interview. The EU introduced the suspension of duties in May, to last for a year.
Following the war’s outbreak in February, Ukraine’s agricultural and industrial production, as well as trade with the outside world, was hard hit.
Dombrovskis, from Latvia, was speaking on the sidelines of a meeting of G7 trade ministers at Neuhardenberg castle, in eastern Germany.
Ukraine’s Economy Minister Yulia Svyrydenko, also present at the talks, had requested an extension of the measure, said the commissioner.
Germany, Europe’s top economy, had indicated it was ready to support an extension, he added.
The ministers in Neuhardenberg also discussed a financial mechanism designed to raise private and public funds for Ukraine’s reconstruction, Germany’s Economy Minister Robert Habeck said.