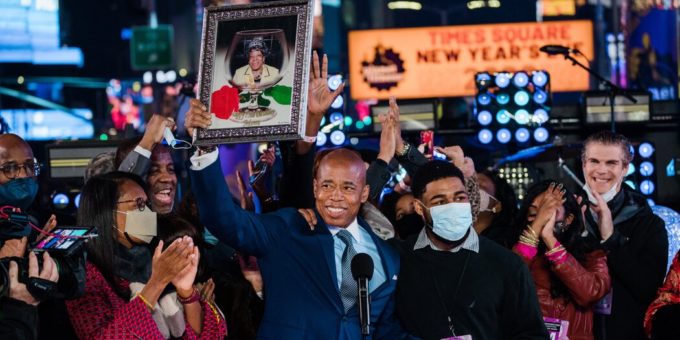 Eric Leroy Adams was sworn in as the 110th mayor of New York City early Saturday in a festive but pared-down Times Square ceremony, a signal of the formidable task before him as he begins his term while coronavirus cases are surging anew.

Mr. Adams, 61, the son of a house cleaner who was a New York City police captain before entering politics, has called himself “the future of the Democratic Party,” and pledged to address longstanding inequities as the city’s “first blue-collar mayor,” while simultaneously embracing the business community.

Yet not since 2002, when Michael R. Bloomberg took office shortly after the Sept. 11 attacks, has an incoming mayor confronted such daunting challenges in New York City. Even before the latest Omicron-fueled surge, the city’s economy was still struggling to recover, with the city’s 9.4 percent unemployment rate more than double the national average. Murders, shootings and some other categories of violent crimes rose early in the pandemic and have remained higher than before the virus began to spread.

Mr. Adams ran for mayor on a public safety message, using his working-class and police background to convey empathy for the parts of New York still struggling with the effects of crime.

But Mr. Adams’s first task as mayor will be to help New Yorkers navigate the Omicron variant and a troubling spike in cases. The city has recorded over 40,000 cases per day in recent days, and the number of hospitalizations is growing. The city’s testing system, once the envy of the nation, has struggled to meet demand and long lines form outside testing sites.

Concerns over the virus caused Mr. Adams to cancel an inauguration ceremony indoors at Kings Theatre in Brooklyn — a tribute to the voters outside Manhattan who elected him. Instead, Mr. Adams chose the backdrop of the ball-drop crowd, which itself had been limited for distancing purposes to just a quarter of the usual size.

Still, his swearing-in ceremony in Times Square, shortly after the ceremonial countdown, was jubilant, and Mr. Adams said he was hopeful about the city’s future.

“Trust me, we’re ready for a major comeback because this is New York,” Mr. Adams said, standing among the revelers earlier in the night.

Mr. Adams, the second Black mayor in the city’s history, was sworn in using a family Bible, held by his son, Jordan Coleman, and clasping a framed photograph of his mother, Dorothy, who died last spring.

As Mr. Adams left the stage, he proclaimed, “New York is back.”

Mayor Bill de Blasio also attended the Times Square celebration and danced with his wife onstage after leading the midnight countdown — his last official act as mayor after eight years in office.

Mr. Adams, who grew up poor in Queens, represents a center-left brand of Democratic politics. He could offer a blend of the last two mayors — Mr. de Blasio, who was known to quote the socialist Karl Marx, and Michael R. Bloomberg, a billionaire and a former Republican like Mr. Adams.

Mr. Adams narrowly won a competitive Democratic primary last summer when coronavirus cases were low and millions of New Yorkers were getting vaccinated. The city had started to rebound slowly after the virus devastated the economy and left more than 35,000 New Yorkers dead. Now that cases are spiking again, companies in Manhattan have abandoned return to office plans, and many Broadway shows and restaurants have closed.

With schools set to reopen on Monday, Mr. Adams must determine how to keep students and teachers safe while ensuring that schools remain open for in-person learning. Mr. Adams has insisted that the city cannot shut down again and must learn to live with the virus, and he has been supportive of Mr. de Blasio’s vaccine mandates.

On Thursday, Mr. Adams announced that he would retain New York City’s vaccine requirement for private-sector employers. The mandate, which was implemented by Mayor de Blasio and is the first of its kind in the nation, went into effect on Monday.

Even so, Mr. Adams made it clear that his focus is on compliance, not aggressive enforcement; it remains unclear whether he will require teachers, police officers and other city workers to receive a booster shot.

Mr. Adams has also said that he wants to continue Mr. de Blasio’s focus on reducing inequality, even as he has sought to foster a better relationship with the city’s elites.

“I genuinely don’t think he’s going to be in the box of being a conservative or a progressive,” said Christina Greer, an associate professor of political science at Fordham University. “Adams is excited to keep people on their toes.”

When Mr. de Blasio took office in 2014, he and his allies made it clear that his administration would offer a clean break from the Bloomberg era; he famously characterized New York as a “tale of two cities,” and vowed to narrow the inequity gap that he said had widened under Mr. Bloomberg.

For the most part, Mr. Adams has signaled that his administration will not vary greatly from Mr. de Blasio’s. Several of his recent cabinet appointments worked in the de Blasio administration.

There will be some differences: Mr. Adams said he does not plan to end the city’s gifted and talented program, as Mr. de Blasio had intended. Mr. Adams has also vowed to bring back a plainclothes police unit that was disbanded last year, in an effort to get more guns off the street.

Mr. Adams will take the helm of the city during a period of racial reckoning, after the pandemic exposed profound economic and health disparities. At the same time, calls for police reform and measures to address the city’s segregated public schools are growing.

During the mayoral campaign, Mr. Adams faced significant questions from his opponents and the news media over matters of transparency, residency and his own financial dealings. Mr. Adams said he was unfazed by the criticism and was focused on “getting stuff done.”

Police Commissioner: Keechant Sewell. The Nassau County chief of detectives will become New York City’s first female police commissioner, taking over the nation’s largest police force amid ​​a crisis of trust in American policing and a troubling rise in violence.

Chief Counsel: Brendan McGuire. ​​After a stint as a partner in a law firm’s white-collar practice, the former federal prosecutor will return to the public sector to advise the mayor on legal matters involving City Hall, the executive staff and administrative matters.

Mr. Adams will have to build relationships with city and state lawmakers, some of whom want to push him to the left. He faced a setback last month when his pick to be the next City Council speaker lost to Adrienne Adams, a Democratic member from Queens who was supported by left-leaning members. Still, Mr. Adams is close with Ms. Adams, who endorsed him for mayor, and the pair recently posted a photo together on social media standing outside the high school they attended in a show of unity.

Mr. Adams has sought to establish a friendly relationship with Gov. Kathy Hochul, who appeared onstage with him at his election night victory rally in November. Working together — unlike their famously warring predecessors, Mr. de Blasio and former Gov. Andrew M. Cuomo — could have political benefits for both of them.

His mayoral campaign focused on public safety, but he also released a flurry of proposals on other issues, including keeping schools open year-round, offering tax credits to poor New Yorkers, and creating “universal child care” for children younger than 3.

“I wore a bulletproof vest for 22 years and protected the people of this city,” Mr. Adams said. “And when you do that, then you have the right to question me on safety and public safety matters. I think I know a little something about this.”

Mr. Adams, who has been guarded about his personal life, will reside in Gracie Mansion; his longtime partner, Tracey Collins, a high-ranking official at the city’s Department of Education, will not live there. Ms. Collins appeared by his side in Times Square — a rare public appearance together.

Stylistically, Mr. Adams could be the most flamboyant mayor New York City has seen in decades. Mr. Adams is an early riser, a vegan and a wellness enthusiast who keeps a frenetic schedule; he is a stylish dresser who campaigned shirtless at Orchard Beach in the Bronx; he socializes with Republican billionaires and celebrities; he wants to take his first paycheck in Bitcoin.

After his election night victory speech, Mr. Adams partied at Zero Bond, a private club in NoHo, where that night’s guests included the comedian Chris Rock, the actor Forest Whitaker, the rapper Ja Rule and business leaders like Eric Schmidt, the former chief executive of Google, and James Dolan, the owner of the Knicks and Madison Square Garden.

“Yes, I like my Ferragamo, and yes, I do go to Zero Bond. But you know what? I also go to Sugar Hill on Nostrand Avenue,” Mr. Adams said at a Democratic fund-raiser in November, referring to a supper club in Brooklyn. “Yes, I do hang out with the boys at night, but I get up with the men in the morning.”

Mr. Adams has promised to make the city fun again. He visited “The Late Show with Stephen Colbert” recently with a pretend bag of marijuana in tow — a nod to legalization efforts.

“We used to be the coolest place on the globe,” he said. “We’re so damn boring now.”

Khatron Ke Khiladi 12: Erika Packard hurts her nose during a stunt; continues to shoot even after injury : Bollywood News
2022-07-03

Premalal Jayasekara’s swearing in is a constitutional violation : Sajith
2020-09-11

Akshay Kumar says coronavirus will have some effect on the Hindi film industry : Bollywood News
2020-03-09