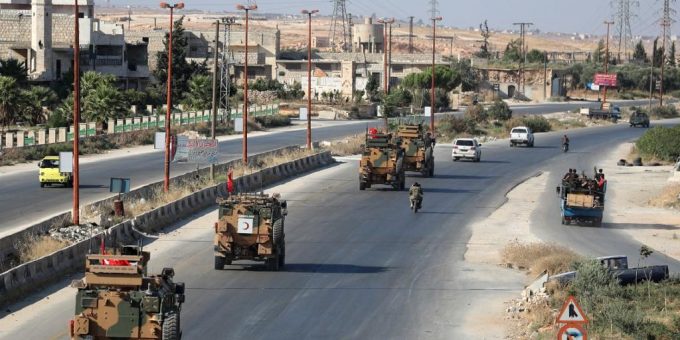 ANKARA: Turkish ground troops will enter a planned safe zone in northern Syria “very soon,” President Tayyip Erdogan said on Monday, after a joint operation center with the United States opened at the weekend.
Turkey and the United States agreed earlier this month to set up the joint center for the planned safe zone along Syria’s northeastern border, but gave few details on the size of the zone or the command structure of the forces to operate there.
“We are slowly making progress in our efforts to establish a safe zone,” Erdogan said. “Just like many other issues some saw as untouchable, we are putting the east of the Euphrates issue on track,” Erdogan said.
Turkey has repeatedly said that it would not tolerate any delays to the agreement by US officials, warning that it will mount a cross-border offensive on its own to clear its borders from the Syrian Kurdish YPG militia if necessary.
On Monday, Erdogan said progress was being made on plans to establish the safe zone, but added that Turkey had made all preparations to carry out its own plans if its expectations are not met.
“Our priority is dialogue and cooperation. If we are pushed to a road that we don’t want or face stalling, our preparations are ready and we will implement our own plans,” he said. “Our UAVs and helicopters have entered the region. Very soon, our ground troops will also enter the region.”
The comments come two days after Turkish Defense Minister Hulusi Akar said the joint US-Turkey center became fully operational. Akar also said some YPG positions in the region had been destroyed by US troops as part of the deal.
Speaking on Monday, Akar said that talks were underway for Turkish and US soldiers to begin joint patrols in the planned safe zone area “soon.”
Ankara and Washington have been at loggerheads over a host of issues including conflicting policies in Syria. US support for the YPG has enraged Turkey, which views the militia as a terrorist organization linked to Kurdish insurgents inside the country.

Priyanka Chopra’s look in We Can Be Heroes leaked