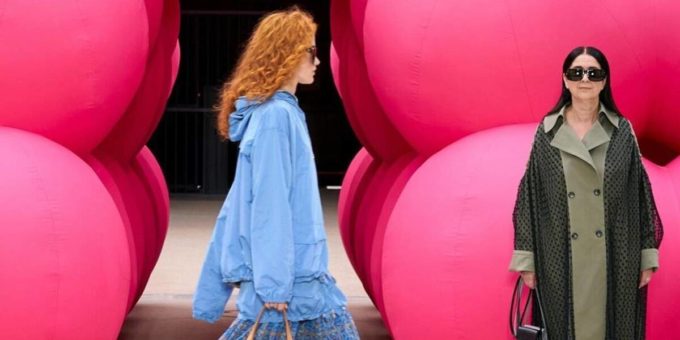 A spattering of Paris Fashion Week menswear shows began in earnest this week for the fall-winter season, with French virus restrictions forcing many to an online-only presence.

Yet those brands that chose to maintain physical shows — like AMI on Wednesday — may benefit from a relative boost in prominence. As ever, the start of Paris Fashion Week is a moment to showcase emerging talents before the later appearances of industry heavyweights like Dior, Louis Vuitton and Hermes.

Here are some highlights of Wednesday’s fall-winter 2022 shows:

If the unmissable billboards across Paris advertising his show are anything to go by, AMI designer Alexandre Mattiussi hoped to capitalise on being among the few in-person shows on Wednesday.

The fall-winter display did not disappoint, being the biggest of the Paris season so far, pulling VIPs such as actresses Catherine Deneuve and Isabelle Huppert and former French First Lady Carla Bruni-Sarkozy to its socially distanced front row at the Paris Bourse. French actress Isabelle Adjani even took a turn as a model walking the runway.

This collection was what Mattiussi does best: Wearable, masculine, boxy clothes, served up with a flash of camp color, feathers or sparkles.

The time dial was turned to the 90s with a predominance of statement coats: Varsity sports styles, oversize monochrome check jackets, a giant oversize number in shocking pink and the giant furry coats of that decade.

Women’s styles on female models were also showcased — a common feature of Parisian menswear shows — in the form of sheeny leopard print outerwear or a skintight silver sequin top that was saleable and cool.

The dark hues and black palette gave proceedings a masculine air but it was enlivened by flashes of royal orange, acid yellow and the appearance of a few Shirley Bassey-style feather boas.

The pandemic has had a devastating impact on numerous fashion houses, forcing the cancellation of big budget collections in favor of digital videos showcasing new designs.

Though these videos do draw global audiences on Instagram, fashion editors believe that the intoxicating mix of in-person clothes, staging and celebrity that makes up a Paris Fashion Week show is hard to emulate on a digital platform.

But the new hybrid calendar has been good for some designers, especially small houses. Steven Passaro, who’s featured on the official Paris Fashion Week lineup for the first time ever, is one designer whose prominence has grown precisely because of the new digital style of presentation.

Passaro, 29, says he didn’t have the money to stage a full Paris Fashion Week show but a video was accessible.

“This is my first time on the calendar. It was possible because the (fashion) ederation didn’t want me to do a show. Making a video means spending way less money,” Passaro told The Associated Press. “It gives smaller houses like us big opportunities.”

Passaro, whose aesthetic mixes couture with applied tailoring and an emphasis on hypersensitive looks, graduated from London College of Fashion before founding his eponymous brand in 2019. But buyers, he said, weren’t yet ready to take on his designs at that time.

“PFW (Paris Fashion Week) helped us to be credible as a brand,” he said.

LEMAIRE GOES FOR THE DECEPTIVELY SIMPLE

Tasteful and deceptively simple designs graced the Lemaire runway in a sublime collection. The 56-year-old house founder, Christophe Lemaire, co-designs with his life partner Sarah-Linh Tran. His resume includes a four-year stint once as the head of Hermes women’s fashions.

Designing talent was on abundant display for the fall-winter show that employed fastidious detailing, pre-war styles in muted hues and plays on proportion.

Men’s and women’s designs fused effortlessly. Block heels of the 1970s mixed with the loose or dropped waists of the 1920s, while oversized coats looked at once 1930s and fashion forward.

The restricted color palette of autumnal taupes, beiges and blue-grays was effective in giving this funky collection a classic hue. Even the humble denim jacket evoked a timeless vibe, rendered loose and clean lined, with the feel of a young, optimistic 1950s United States.

Cultural fusion and a melting-pot mentality were elemental for designer Anthony Alvarez as he staged his first on-calendar show for his fashion label Blue Marble.

The brand name is borrowed from the iconic photographic image of the Earth taken in 1972 by the Apollo 17 crew. Clearly, it’s a branding symbol that harks to Alvarez’ heritage: He’s New York-born with a mixture of Filipino, Spanish, French and Italian roots.

The collection celebrated this globe-trotting vision with eye-popping color and myriad references. The first looks were said to be inspired by the hue-rich sails of traditional boats in the Philippines.

Alvarez is another example of how the hybrid digital fashion calendar has shone a spotlight on smaller houses.

French actor Gaspard Ulliel, known for appearing in Chanel perfume ads as well as film and television roles, died Wednesday after a skiing accident in the Alps. He was 37.

Ulliel portrayed the young Hannibal Lecter in 2007′s “Hannibal Rising” and fashion mogul Yves Saint Laurent in the 2014 biopic “Saint Laurent.” He is also in the upcoming Marvel series “Moon Knight,” and was the advertising face of the fragrance Bleu de Chanel.

In a statement to AP, Chanel expressed its “deep sadness” at the news, saying that in addition to being a house ambassador, Ulliel was a close friend to many.

“We have been fortunate to have had by our side all these years a person endowed with great culture, an immense talent, and of unparalleled kindness. He will be sorely missed. Our thoughts and prayers go to his family and his friends.”

Ever Seen Coloured Samosas? Watch This Video Of A Kanpur Street Food Stall Making Them