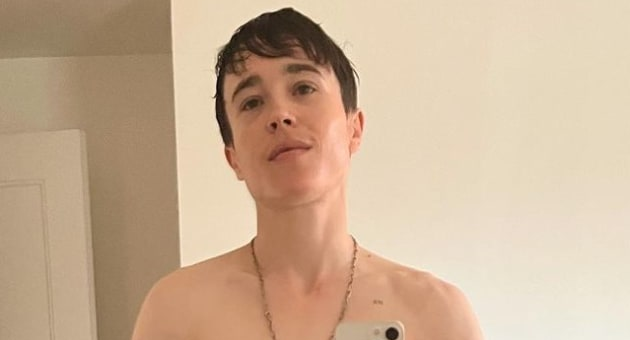 Thirst trap selfies are always a flex. Sometimes, they are more than that.


Elliot Page posted a new shirtless photo over the weekend.


The actor is flaunting his abs alongside a nonchalant caption.


But there’s more to this photo than a stellar torso.


But not everyone even managed to see the caption.


They were, of course, too dazzled by his fit torso and solid abs.


Obviously, their new photos made the rounds across social media.


People were falling over themselves with thirst.


But, as with Elliot’s previous thirst trap along similar lines from much earlier this year, there was more to it.


Elliot is trans, having come out as nonbinary last year.


Anyone, transgender or cisgender, could enjoy showing off their abs. But going shirtless can be nothing short of euphoric in the trans community.


Like gender dysphoria, gender euphoria can be tricky to explain at times … or almost stunningly easy.


Basically, doing something that does not mesh well with who you are can feel intrinsically wrong in ways that are difficult to articulate.


An example of a cisgender person experiencing gender dysphoria would be Amanda Bynes feeling extreme discomfort over her appearance in She’s The Man.


For a trans example, Elliot starred in Juno many years before he came out, but experienced dysphoria over having appeared pregnant in the film.


Gender euphoria is just feeling a sense of satisfaction when gender is involved, and cis people can certianly experience this as well.


For Elliot and for countless transmasc trans folks, going outside without having to cover up, and being able to post those photos to social media, is a milestone.


Not all trans people get to experience that, of course, in part because not everyone is able to get top surgery — or wants it.


(Anatomy isn’t gender in the same sense that hair color isn’t favorite color — you can dye your hair your favorite color, but you don’t have to)


That said, because of multiple factors (including society itself and how it treats and categorizes people), treatments like HRT and top surgery can be life-saving.


Elliot is fortunate in that his wildly successful acting career, which began when he was still a child, makes this kind of affirming healthcare easily within reach


His fame also comes with pitfalls, including some specific drawbacks related to being trans.


The entire world knows his deadname, and some — through thoughtlessness or malice — will never call them Elliot, or use their pronouns, which are he/they.


But Elliot has been using his fame, his platform, and his voice for change for many years — starting long before he came out as trans.


In fact, he has been speaking up for marginalized communities and for human rights in general since long before the world knew that he was part of the LGBTQ+ community.


Being famous has its drawbacks, but we’re glad that Elliot continues to put himself out there as a shining example. Plus, we never mind a good thirst trap.

Sirivennela Seetharama Sastry dies at the age of 66