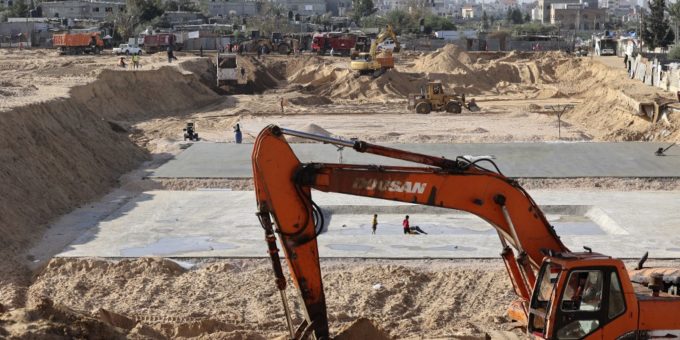 GAZA: Palestinian Zeyad Abu Odah watched with a smile as his four-story house, destroyed in an Israeli air strike in last May’s fierce fighting, was slowly being rebuilt in Gaza’s Beach refugee camp.
He is one of the lucky few. Only 50 of 1,650 homes wrecked in an 11-day war between Gaza militants and Israel are being restored, leading to frustration among Palestinians at the slow pace of reconstruction eight months after the conflict ended.
“When things started to move, we began to feel better. In six to seven months we will return to our house with our children and families,” Abu Odah, 60, said, as construction workers put the finishing touches to the first floor.
Abu Odah’s extended family of 50 members has been living in four separate homes since the conflict.
Gaza officials estimate that it will take $479 million to rebuild homes and infrastructure damaged in the war. Qatar and Egypt have each pledged $500 million for reconstruction in the Gaza Strip, which is run by the Hamas militant group.
Naji Sarhan, Gaza’s deputy housing minister, said only $100 million had been made available so far and that, with Qatari funds, reconstruction had begun on 50 of 1,650 destroyed homes. Sarhan cited Israeli pressures, but did not elaborate.
“It is clear the Israeli occupation is exerting political pressure and making obstacles,” he told Reuters.
COGAT, the Israeli Defense Ministry’s liaison office to the Palestinians, did not respond to a request for comment.
Israel, which controls the main commercial crossing into Gaza, has said reconstruction would be linked to achieving a deal for the handover of two Israeli civilians and the bodies of two Israeli soldiers believed to be held by Hamas.
But in an apparent bid to lower tensions with the group, it recently allowed more construction materials into Gaza to rebuild homes destroyed or damaged during last year’s war.
Sarhan also pointed at the lack of broader Arab and international support for the reconstruction process beyond Qatar, Egypt and the United Nations.
“Reconstruction process is slow and doesn’t meet our ambitions,” Sarhan said.
Israeli air strikes partly damaged another 59,000 homes during the conflict, according to Gaza’s Hamas-run government. Some homes in Israel were damaged by rockets launched by the Islamist Hamas and by fellow militant groups.
The United Nations Relief and Works Agency UNRWA, which aids two thirds of Gaza’s two million people, has also helped repair the damaged houses of refugees.
Egyptian bulldozers and engineers have begun work in the northern Gaza Strip at the first of three large housing projects funded by Cairo.
Sarhan said the Egyptian “cities” would house nearly 4,000 families. There was no time frame for when construction would finish.
The cities would serve low-income people as well as hardship cases and some of those who had lost their homes in the conflict, he added.

How to Make UPI Payments Without an Internet Connection: A Step-by-Step Guide
2022-05-01