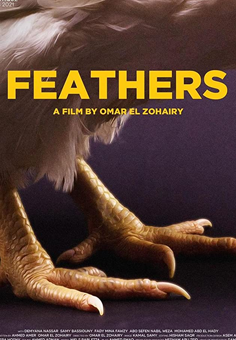 Egyptian movie “Feathers” has drawn critical acclaim abroad but its unsettling depiction of poverty in the Arab world’s most populous country has sparked heated debate at home. Veteran actor Sherif Moneer, who walked out of a screening at Egypt’s El Gouna Film Festival this month, has led a patriotic backlash against the film for “presenting Egypt negatively”. But others have praised director Omar El Zohairy for shedding light on a genuine social problem in a way that is both artistic and constructive.

On late Friday at the closing ceremony of the fifth edition of the El Gouna Film Festival, “Feathers” won the award for best Arab narrative film.

“For me any artistic work will always generate differing views,” a beaming Zohairy told AFP on the red carpet, addressing the issue after claiming the prize.

“The film is more important than any award,” the director said. “The film is strong because of its feeling, artistic authenticity… and human values.”

“Feathers” tells the story of Om Mario, a poor woman from the rural south who struggles to make ends meet after her husband is transformed into a chicken.

The absurdist narrative is performed by an amateur cast, mostly from the country’s Coptic Christian minority.

It was the first Egyptian feature film to win a major award at the star-studded Cannes Film Festival this year.

The film’s opponents, who also include pro-government lawmakers, accuse Zohairy of creating an exaggerated image of squalor that bears no relation to contemporary Egypt.

“The slums that we had and those that are disappearing now are better than the scenes represented in the film,” Moneer, the actor, said in a television interview this week.

“The state has made great strides in eliminating slums and moving people to excellent alternative furnished housing… We are in a new republic now.”

Loyalist MP Mahmud Badr took to Twitter to condemn the “making of a movie depicting your country as if there was no development.”

Samir Sabry, a lawyer with a penchant for suing critics of President Abdel Fattah al-Sisi, filed a lawsuit against the film’s producers for “insulting Egypt and Egyptians”.

‘SHEDDING LIGHT’ — but the rush of well-to-do Egyptians falling over each other to defend government policy and national pride over a movie about poverty was widely lampooned on social media. Economic rights researcher Osama Diab said the film’s depiction of poverty was by no means exaggerated, based on the government’s own figures.

Around one in three of Egypt’s 100 million people live below the poverty line.

“It has been steadily on the rise in Egypt since the ’90s, according to official figures,” Diab told AFP.

In the past two years, Covid-19 had further deepened social inequality because of “the disproportionate impact of the pandemic on the poor”, he said.

“The highest concentration of poverty is among women living in the countryside of Upper Egypt, which is ironically the setting of the film.”

Diab said poverty reduction had never been a priority for government economic policy, which had been set in agreement with the International Monetary Fund.

Egypt adopted a raft of harsh austerity measures in 2016 to secure a $12 billion loan from the IMF, including a devaluation of the Egyptian pound.

Last month, the IMF hailed the country as one of the few emerging markets that had weathered the pandemic and experienced positive growth.

“The IMF 2016 programme only speaks of mitigation of the shocks caused by economic reforms whereas they don’t speak of poverty alleviation. It was never a goal in itself,” Diab said.

Film critic Tarek El-Shenawy, who saw the first screening of “Feathers” at the Cannes Film Festival, described the backlash against the film as “vulgar and silly”.

He praised the movie as artistically “great”, with an “engaging story” and in no way insulting to Egypt.

“If you’re actually shedding light on a social problem then you’re really wanting to move your country forward not insulting it,” he said.