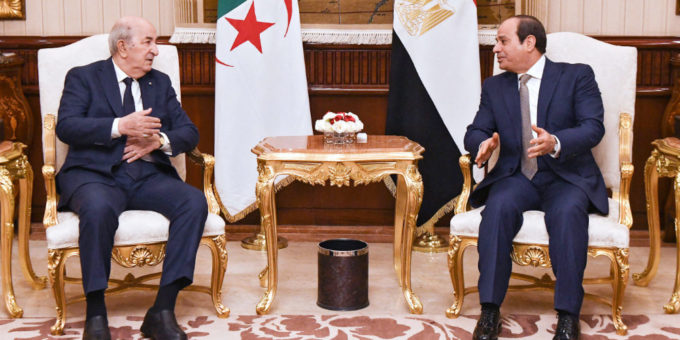 CAIRO: Egyptian President Abdel Fattah El-Sisi and his Algerian counterpart Abdelmadjid Tebboune on Tuesday expressed their agreement on the need to hold simultaneous presidential and parliamentary elections in Libya.

During a joint press conference in Cairo, Tebboune said his talks with El-Sisi represented “a complete consensus of visions and points of view.”

El-Sisi said the talks included the issue of “water security,” adding that “our visions coincided with the need to reach a comprehensive agreement on the Renaissance Dam” in Ethiopia, which threatens to reduce Egypt’s and Sudan’s shares of Nile water.

El-Sisi said he and Tebboune also agreed on the need for foreign fighters to leave Libya “in a way that achieves security” for the country and its people.

Egypt’s president added that they held “intensive and constructive discussions that dealt with international and regional issues,” and “reflected the common will to strengthen all frameworks of cooperation between the two countries … taking into account confronting and rejecting foreign interference in the region.”

He said they also agreed on the need for a two-state solution to the Israeli-Palestinian conflict, with East Jerusalem the capital of a Palestinian state.

El-Sisi wished Algeria success in its presidency of the upcoming Arab Summit.