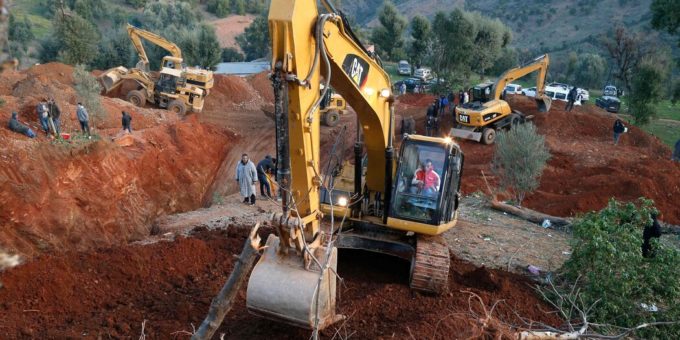 CAIRO — Rescuers working day and night were tunneling toward a 5-year-old boy on Saturday, his face distraught and bloodied, to rescue him from a 100-foot-deep well in a sleepy Moroccan village where he had been trapped for nearly four days.

By early Saturday, they were within about 10 feet of him, rescuers told the local news media.

The operation to save the boy, Rayan, who fell to the bottom of the well in northern Morocco, was in what rescuers described as the final, critical stages as Moroccans and others across North Africa breathlessly followed the rescue on livestreams.

Rayan has been stuck in the well near his home in the tiny village of Ighrane, about 125 miles from the city of Chefchaouen, since Tuesday afternoon. Rescuers brought in bulldozers to dig a parallel shaft from which they could tunnel through to reach the child, but they feared that either part of the well or the parallel shaft would collapse before they could get there.

According to state-run television that had been airing a livestream of the operation, rescuers also appear to have encountered hard rocky barriers that impeded their progress as they continued to shift course and carefully dig across.

The state-run news agency Maghreb Arabe Presse said the drilling process was in its “final stages.” The operation was temporarily paused around nightfall on Friday, but rescuers resumed once it was deemed safe to proceed.

According to Le360, a local publication, two rescuers were manually digging the final feet that separated them from Rayan. A helicopter was on the scene to transport the boy to a hospital in one of the major cities.

As rescue workers jockeyed to save the boy, throngs of people looking on at the site recited prayers and shouted encouragements to the rescue team. Some onlookers sat around or slept under trees, eager to witness the resolution of the crisis. Rayan’s family made couscous, the traditional Moroccan dish, and served it to people among the crowd. Others distributed bread and dates.

Abdelhadi Temrani, one of the rescuers, said the effort was a very delicate process.

“This stage is the most important and most complicated one,” he said on Friday. “You can’t sacrifice a team if there is a chance of collapse,” he added, explaining that the rescuers could not send anyone down to start digging across until they had secured the parallel shaft.

Using rope, rescue workers on Thursday lowered an oxygen tube and water to the boy and also sent down a camera to monitor him, according to Maghreb Arabe Presse.

Short videos of the boy, barely moving, were shared in which it appeared he was still breathing.

The local news media reported that there were five bulldozers and dozens of rescuers, including a team of topographers. The reports said that even a local mountaineering and caving society had gotten involved in the effort.

In an interview with Le360, Rayan’s father said that he had been in the process of fixing the well, which he owns, when his son fell in. He was playing when he fell, according to local news reports.

“Everyone is doing their best so that he comes out alive and that we can take him in our arms by the end of the day,” his father said.

The tiny village of Ighrane was overrun with reporters, many of them broadcasting live.

The scenes of bulldozers digging under floodlights while thousands of Moroccans waited in suspense made the Arabic hashtag #SaveRayan a viral rallying cry on Twitter.

The hashtag was trending across Morocco and neighboring Algeria, and even in France, where there is a large Moroccan diaspora.

Parrots for sale: The internet's role in illicit trade

Weight loss story: “My daughter was teased over my appearance, so I decided to become a superman for her!”
2020-01-11