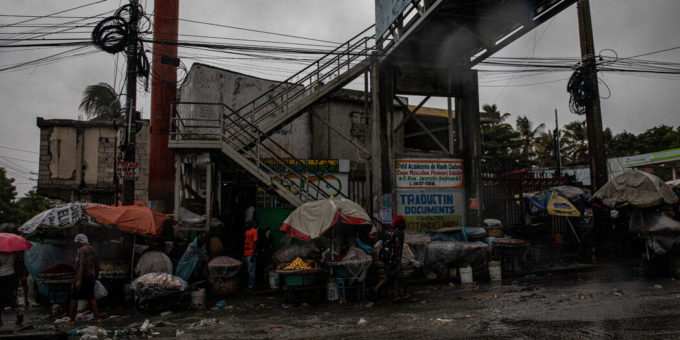 PORT-AU-PRINCE, Haiti — The death and injury tolls leapt by many hundreds on Tuesday from the weekend earthquake in Haiti’s southern peninsula, as survivors soaked from Tropical Storm Grace struggled to keep safe in makeshift shelters.

Haiti’s National Emergency Operations Center said that as of Tuesday evening the number of dead totaled at least 1,941, with 9,900 injured, compared with the official tallies of about 1,400 dead and 7,000 injured reported 24 hours earlier.

The sharp increases, while not unexpected, pointed to the slow effort to recover victims of the 7.2 quake on Saturday, which affected roughly 1.5 million people in an area about 80 miles west of Port-au-Prince, the capital.

The rain brought by the storm had largely stopped on Tuesday, and many people in afflicted areas were out looking for loved ones, scavenging for supplies and trying to get aid from humanitarian groups, whose efforts were being hampered by severe flooding across the country. Many had sought refuge in the few public buildings spared by the quake.

“In a situation like this, you feel you’re powerless,” said Abiade Lozama, an Anglican archdeacon based in the south of the country, which was hard hit by the quake. “Many people are in need and there’s nothing you can do.”

Archdeacon Lozama said hundreds of people made homeless by the earthquake on Monday night streamed into a technical school he runs in the town of Les Cayes, seeking shelter from rain and wind.

In one video, a man could be seen making his way through muddy water that had flooded a street up to his waist on Monday, when the storm struck. Another video showed floodwaters rushing across a street and inundating nearby homes.

“It’s totally turned into a river,” a man is heard saying in the video, which appeared to have been shot in the city of Jacmel, on Haiti’s southern coast.

Heavy rains also pelted people who had huddled in fields, many of them forced to leave homes damaged in the 7.2-magnitude earthquake, and others who had sought safety outdoors because of a fear of aftershocks that could cause further collapses.

One video posted on Monday showed dozens of people trying to take shelter under plastic tarpaulins provided by the U.S. Agency for International Development, which has sent help to Haiti, as they were hit by gusts of wind that had blown down their campsite. Earlier in the day, chaotic scenes occurred near overcrowded shelters as dozens of people jostled to find a place to stay before the storm hit the country, according to images from the French public news broadcaster France 24.

In a message posted on Twitter on Monday night, the civil protection agency of Haiti said that heavy rainfall in the southern region was making the situation for displaced people even more challenging and called on residents whose homes had not been affected to help shelter them.

The storm has complicated an already tenuous earthquake relief effort, disrupting an air bridge run by humanitarian groups and the U.S. Coast Guard between affected areas of southern Haiti and the capital. The only road linking southern Haiti to Port-au-Prince, the capital, has come under periodic attack from armed gangs, despite a humanitarian truce offered by some gang leaders following the earthquake.

As of Tuesday morning, Grace, which hit Haiti as a tropical depression on Monday night but was later upgraded to a tropical storm, had moved away from Haiti’s shores and was nearing Jamaica, according to the National Hurricane Center.

The relief effort managed from the Port-au-Prince airport was largely coordinated by international aid groups and the U.S. Coast Guard. There was no sign of the Haitian authorities, underscoring the power vacuum left in a country without a president or a functioning government.

As Grace made landfall in Haiti, efforts were being made to bring aid to the country’s southwest, which was devastated in the deadly earthquake just two days earlier.

UNICEF estimated on Tuesday that about 1.2 million people, including 540,000 children, had been affected by the earthquake.

Thousands of homes have been destroyed, as well as dozens of schools, churches and health centers, according to reports by local authorities.

Memories of the crippling 2010 earthquake — and the shambolic humanitarian response that followed — are still vivid in the minds of Haitians, and the government has promised a more effective reaction this time. But the shipping of aid to the southwest has been hampered by logistical issues and medical facilities are lacking in that part of the country.

Prime Minister Ariel Henry said on Sunday that all aid received by the country would be handled by a single operations center in Port-au-Prince to avoid having humanitarian assistance arrive “in disorder,” as it often did in 2010, leaving many people excluded from rescue efforts.

In the aftermath of the 2010 earthquake, the country earned the nickname “The Republic of NGOs” after nongovernmental organizations became the main channel for humanitarian assistance, essentially filling the void left by weak government institutions.

Several countries, like Mexico, have flown aid to Haiti in recent days and the United States has sent a search-and-rescue team. On Tuesday, the European Union announced that it was allocating 3 million euros, about $3.5 million, in humanitarian funding to help affected communities.

“The E.U. is quickly mobilizing support to this already extremely fragile country, where hurricanes and heavy rainfalls aggravate the dire situation even more,” Janez Lenarcic, the bloc’s commissioner for crisis management, said in a statement.

Paul Farmer, a physician and co-founder of the relief agency Partners in Health, which oversees several hospitals in Haiti, said that the country had established new emergency medical services in the intervening years, largely improving its ability to respond to an earthquake.

“This time around,” he said, “the idea is: How can we coordinate the response so that it doesn’t become a burden for the Haitians?”

Anatoly Kurmanaev reported from Port-au-Prince and Constant Méheut from Paris.

Covid: Australia's Qantas says all staff must be vaccinated

Sonam Kapoor in tears at Rhea Kapoor’s wedding: ‘We will always be connected by heart’, see photos