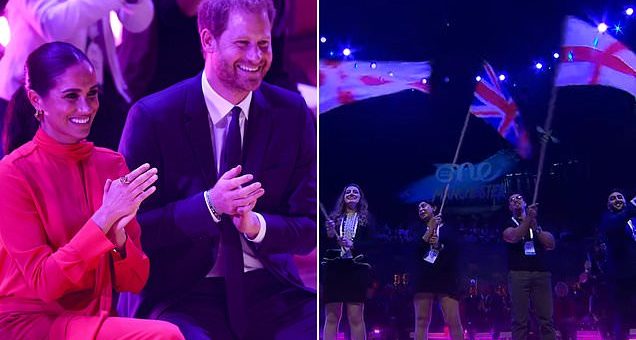 Prince Harry demonstrated support for his home nation when the British flag was waved during the One Young World Summit.

Harry, 37, and his wife Meghan Markle clapped enthusiastically as the UK flags were waved in front of the 2,000-strong crowd at Bridgewater Hall in Manchester on Monday night.

The pair, who moved to California after stepping down as working royals, were seen clapping harder as the flags of Great Britain were presented, despite the fact that they have publicly slammed the Royal Family and claimed they don’t feel safe in Britain.

The couple’s apparent excitement for the UK came after they stood up as the Ukrainian flag was presented, likely in solidarity with the country amid Russia’s invasion. Several summit attendees stood to issue support for Ukraine.

Meghan, 41, gave her first speech in Britain since Megxit during the summit, as she gushed about Prince Harry and the ‘life-changing’ impact of becoming a mother to Archie. She also told the audience ‘it is very nice to be back in the UK.’

The summit marked the couple’s first public appearance in the UK since returning for the Queen’s Platinum Jubilee in June.

The Duke and Duchess of Sussex clapped along to the music as the flag ceremony took place across the stage.

The pair were sat centre stage on a bench together as they joined One Young World counsellors to watch the flag bearers enthusiastically parading the flags of more than 200 countries during a ceremony.

Meghan, with her hair in a sleek ponytail, sat with her legs crossed and swayed in time to a rendition of Dancing In The Streets as she clapped her hands.

The ceremony also included the flag of the Refugee Nation, which has been included in the ceremony since 2016.

Harry and Meghan are in the UK this week for two charity events.

The couple has asked private security firms to provide a ‘ring of steel’ in Manchester for their appearance at the One Young World young leaders’ forum, amid a row over who pays for their protection on UK soil.

The trip comes amid Harry’s ongoing legal battle with the Government over his security when in the UK. He launched legal action after he was told he would no longer be given the ‘same degree’ of personal protection after stepping back from the Royal Family in 2020.

He said he did not feel safe under current security arrangements bringing his family here and has offered to pay for British police to act as bodyguards himself. Last month, he won a bid to bring a High Court claim against the Home Office.

As well as a huge security operation, media access has also been severely curtailed to the events in the UK, with only hand-picked journalists able to cover the couple.

Harry and Meghan have taken part in several interviews since their departure from royal life, including their controversial sit-down with Oprah in 2021 during which they accused the Royal Family of racism and said the institution failed to help a suicidal Meghan.

During that interview, Meghan revealed that while they lived in the UK she didn’t feel safe being left home alone.

She recalled encouraging Harry to skip a Cirque du Soleil event at Royal Albert Hall in 2019 as she battled with her mental health.

‘I can’t be left alone; I’m afraid of what I might do,’ Meghan said she told Harry.

The couple attended the show together but Meghan claimed she cried throughout the performance.

‘I think so important for people to remember is you have no idea what’s going on for someone behind closed doors. No idea,’ she told Oprah of the event.

‘Even the people that smile and shine the brightest lights. You need to have compassion for what is actually potentially going on.’

Harry also said he felt ashamed that he didn’t know how to help Meghan and admitted he didn’t go to palace officials or the other royals for assistance.

At times in its past, retreat of the massive Thwaites Glacier was even quicker than it is today, heightening concerns for its future — ScienceDaily