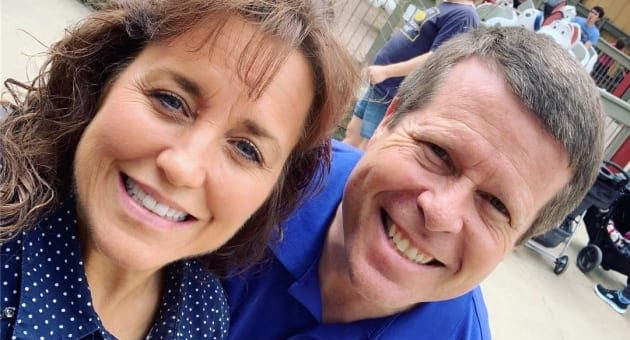 
Michelle Duggar is 55 years old and she has 19 children.


If it takes nine months to carry a child to term, and at least some period of time to recover after giving birth before one’s eggs get fertilized once again by a few drops of sperm, well…


… one must have started procreating at a VERY young age in order to hit the two numbers cited above, you know?


Many fans of the Duggar family have likely been aware of these facts for awhile now.


And yet they didn’t stop and really think about it, apparently.


They didn’t stop to figure it all out — and were therefore shocked to learn recently that Michelle married Jim Bob Duggar when she was a mere 17 years old.


(And he had just turned 19 three days earlier.)


A user stumbled upon this tidbit last week after coming across some stuff Michelle said about her nuptials from back in the day.


“Our wedding was sweet and simple,” Michelle previously said, noting that she exchanged vows just months after her high school graduation.


“At the time, our church was still being built, so we were meeting in a gymnasium for services. We actually got married in the hallway of a building – we had to set up folding chairs as pews!


“I wanted to do as much as I could myself as a way to save money and keep the expenses reasonable.”


Gotta save money for all those millions of future diapers.


Just this past February, Justin Duggar married Claire Spivey as a teenager.


Moreover, many of Michelle’s sons and daughters are parents before they’re of legal drinking age — so we’re not certain why Michelle’s admission has taken so many folllowers so far aback.


But taken them aback it has!


“This is so sad, so disturbing and honestly I’m surprised that she even finished high school before she got married,” wrote person wrote in response to the news.


A second asked: “Can you imagine still being with the person you were with at 17?”


And a third added: “Makes sense why she has no problem with her kids getting married as teens.”


Yes, of course this makes sense!


It’s a religious code Michelle and Jim Bob live by, and one they’ve tragically passed down to nearly all of their sons and daughters.


In May, Jill Duggar basically came out and revealed that her parents pressured her and her sisters to get pregnant as often as humanly possible.


As loyal readers of this website know, of course, Duggar children are not allowed to even kiss their significant other until they become a husband or wife.


What sort of effect does being raised in such a strict household have on one’s psyche?


We can’t say for surre.


But Josh Duggar was arrested this April on two counts of child pornography possession.


Said Jim Bob and Michelle in the only statement they’ve issued this this happened:


We appreciate your continued prayers for our family at this time.


The accusations brought against Joshua today are very serious. It is our prayer that the truth, no matter what it is, will come to light, and that this will all be resolved in a timely manner.


We love Josh and Anna and continue to pray for their family.

Arsenal deserved to win, says Arteta after defeat against Villa
2021-02-07