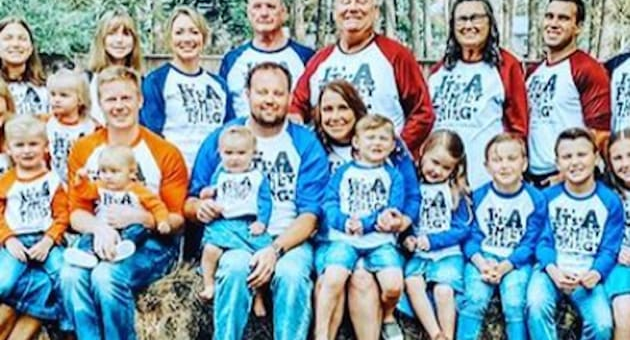 
The Duggars are not the only family whose shady ties to IBLP will be dragged out into the light, just the most famous.


Amazon Studios has greenlit the docuseries about the sinister truth behind several reality TV families.


Here is everything that we know:


For (too many) years, 19 Kids and Counting and then Counting On provided the world with a false, sanitized view of the Duggars.


Watching the show without learning anything more than what you saw on TLC, one could almost imagine the Duggars as a “quirky” family.


Behind the bad perms and the sad clothes is a culture of extremism, abuse, bigotry, and trauma.


Unlike TLC’s array of past and present programming showcasing fundamentalist cult families, the new docuseries aims to show a more honest view.


Amazon Studios greenlit the new series in December of 2021.


The docuseries will be made by the same filmmakers who made Fyre Fraud for Hulu and LuLaRich for Prime Video.


The focus will primarily be the Duggars and other reality TV families linked to the nefarious Institute in Basic Life Principles.


This is the cult that sets the standard for the Duggars and many other fundamentalist families in terms of how they treat women, “educate” their children, and cover up crimes.


Production is currently underway, but the premiere is not expected until late 2022 or early 2023.


The series will premiere on Amazon Prime, of course.


In addition to Amazon Studios, The Cinemart, Story Force, and Chick Entertainment are producing the series.


Other families featured on the show will include the Plath family of Welcome to Plathville and the Bates family of Bringing Up Bates.


Amazon Studios released a blurb when news broke that the docuseries was going to happen.


“On the heels of Josh Duggar’s explosive criminal trial,” the release began.


Amazon Studios continued: “The untitled project will expose shocking connections between some of reality television’s large, most famous large families.”


The project will connect these families “and The Institute in Basic Life Principles, a controversial fundamentalist organization and homeschooling empire.”


“In addition, prominent commentators, writers, and social media voices,” the blurb went on.


To be clear, the insidious links between the Duggars and Bates families and IBLP are not a secret.


IBLP, as long-time Duggar-watchers may recall, is a fundamentalist ministry founded by Bill Gothard.


Gothard resigned in 2014, however, after the allegations of sexual abuse became too loud and numerous for even him to keep quiet.


As widely reported, IBLP is secretive and cult-like in all of the worst ways, encouraging members to isolate from society.


The ministry embraces a harshly authoritarian and patriarchal philosophy, both in terms of theology, teachings, and in practice.


The creepy cult “house rules” of the Duggar family are conspicuously similar to IBLP rules. Even those ridiculous perms stem from Gothard.


To be honest, we suspect that elements of the docuseries will be triggering to numerous viewers who have their own trauma.


This isn’t a “fun” documentary about rich dirtbags getting what they deserve, or a quirky pyramid scheme with bad vibes.


Any story about IBLP families will involve generations of abuse, and dozens of children whose lives were ruined the moment that they were born into a cult. That’s the painful truth.

‘It brings back all the horrible memories’: British Columbians mark 37 years since Air India bombing
2022-06-25

Akshay Kumar on Padman National Award win: All my tiredness vanished after hearing the news
2019-08-10