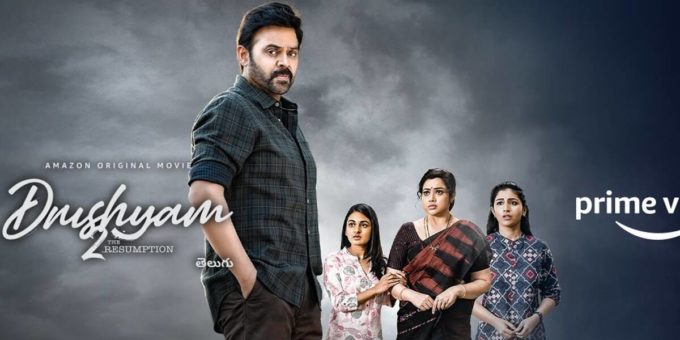 Amazon Prime Video on Monday released the trailer of Drushyam 2, which is the remake of Malayalam hit Drishyam 2.

The first part of the Telugu remake, starring Venkatesh Daggubati, Meena and Nadhiya, was helmed by Supriya. The film, which came out in 2014, was received well both by critics and the audience. The second part, however, is helmed by director Jeethu Joseph, the original creator of the Drishyam franchise.

Judging by the trailer, Jeethu Joseph has made a scene-by-scene remake of Drishyam 2. The film is set six years after the events of the first film. While Rambabu and his family seem to have moved on with their lives and made peace with the crime that shook the very foundation of their being, the reality is far from the truth. Each member of Rambabu’s family is trying to deal with the trauma of the crime in their own ways. Rambabu seems to be drowning himself in alcohol and focused on making his dream movie. He seems to have forgotten the crime. Or has he?

“With the sequel, we intend to finally put to rest all theories that our fans have been sharing with us over the years about how and what could have taken place in Rambabu’s life as he strode ahead, having sworn to protect his family. Drushyam 2 will take audiences on an emotional-yet-exhilarating journey, with the twists and turns in the plot that keep the suspense alive, and our viewers yearning for more,” Venkatesh said.