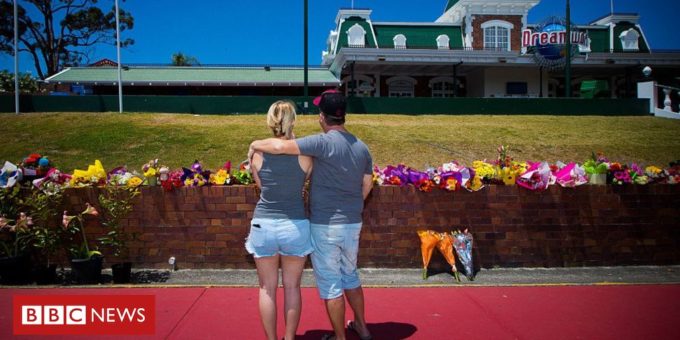 The operator of Australia’s Dreamworld theme park has been charged with safety breaches over a water ride malfunction that killed four people in 2016.

Kate Goodchild, Luke Dorsett, Roozbeh Araghi and Cindy Low died almost instantly when their raft collided with another and overturned, crushing them.

A coroner’s inquiry later found there were “unfathomable” errors with safety at the park on Queensland’s Gold Coast.

How did the accident happen?

The collision took place at the end of the Thunder River Rapids ride, an attraction that simulated the experience of white-water rafting.

The malfunction happened about 15 seconds after a pump stopped working and caused water levels to drop, the coroner was told in 2018.

Two children were also thrown from the raft but survived.

Coroner James McDougall found a “systemic failure by Dreamworld in relation to all aspects of safety”, ruling the accident had been “only a matter of time”.

What’s been the reaction to the charges?

Prosecutor Aaron Guilfoyle said the three charges alleged that Dreamworld failed in its duty of care. They would be the only charges brought, he added.

Queensland Industrial Relations Minister Grace Grace said: “They are the maximum charges in the act, and the prosecutor is independent and we respect his decision and await the outcome from the courts.”

In a statement to the Australian Stock Exchange, Ardent Leisure again expressed its “deepest sympathies” to the victims’ loved ones.

“There has been considerable change at Dreamworld over the last few years as was acknowledged by the coroner in his report,” the company said.

A court will hear the matter on 29 July.

What else happened after the tragedy?

Queensland introduced industrial manslaughter laws following the accident and other unrelated workplace deaths. They will not be applied retroactively.

The park closed for six weeks after the accident, and the Thunder River Rapids ride was demolished. Other rides have shut since.

No relatives took the stand at the coroner’s inquiry, but many tributes were paid to the victims after the accident.

Among them were Mr Araghi’s brother, Simon, who described his sibling as an intelligent and “amazing kid”.

Ms Low’s mother-in-law, Dianne Bond, told the New Zealand Herald: “We lost the most wonderful daughter-in-law – she was far too young.”

Mike Pompeo Urges Entire World To Stand Up To China