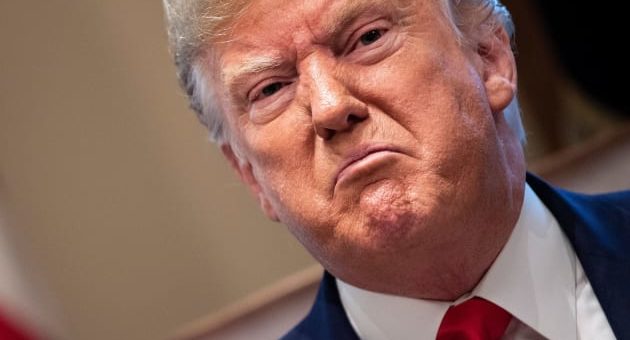 Folks, it’s been almost six months since Joe Biden was sworn in as president, and some of you many find yourselves craving the reckless, chaotic energy that can only be provided by one Donald John Trump.


Lucky for you, the Donald is like a toddler with undiagnosed ADHD — he never stops making moves.


While he may have been demoted from Leader of the Free World to Florida Man, Trump is still creating drama and tugging on the threads that make up the fabric of American democracy.


Earlier this week, we learned that Trump believes he’ll be reinstated as president as early as this summer.


And what might have caused him to believe something so incredibly bonkers, you ask?


Well, crazy people often have delusions of grandeur, and when you give one of these nutjobs actual power — by, say, electing them President of the United States — it’s a sure bet that whatever is left of their mental health will take flight and explode like an Inauguration Day firework.


In Trump’s case, he’s so loony that four years of daily exposure to the guy has caused widespread insanity throughout the nation.


Folks on both the Right and the Left are susceptible to Trump Derangement Syndrome (or TDS), and we’re sure you’ve seen the symptoms in loved ones:


Inability to talk about anything other than Trump, willingness to destroy lifelong relationships do to differing views on a handsy reality star, and a vulnerability to wacky conspiracy theories involving some or all of the following: Russia, vaccines, and Melania body doubles.


But the powers that be are taking action to help stop the spread and flatten the curve.


And by “the powers that be,” we mean tech weirdos like Mark Zuckerberg.


Yes, Facebook’s “independent Oversight Board” — aka the team that Zuck and company punt to when they want to avoid making a controversial decision — has decided to suspend Trump’s account for at least two years.


In a sense, the decision is a victory for Team Trump, as the ban was previously open-ended.


The Oversight Board ruled that the decision should be re-visited exactly two years from the beginning of Trump’s suspension, which began one day after the January 6 Capitol Building riots.


So the ban is now … less open-ended?


Regardless of your feelings toward Trump or your thoughts on freedom of expression in the age of social media, hopefully we can all agree that this whole situation highlights the absurdity of our times.


Facebook is one of the most powerful brands on the planet, and yet, it seems that they devised this Oversight Board with the goal of never having to take accountability for any of their actions ever.


There’s a nuanced conversation to be had about whether corporations should have the power to silence a former president.


Perhaps, since said president’s previous content might have caused an act of insurrection that resulted in multiple deaths, it would be unsafe to allow him to continue communicating with the public.


Or perhaps the Facebook-Google duopoly has entirely too much power, and we’re embarking down a slippery slope by giving a corporation the power to deny a former president the means to communicate with the tens of millions of people who voted for him.


But one thing is for certain — it would be great if the head of the company would stick his neck out and take a more active role in these discussions.


Granted, the bulk of our Zuck knowledge comes from The Social Network movie, but why did Justin Timberlake give Jesse Eisenberg those business cards that say “I’m CEO, Bitch!” if he’s never gonna take charge and make any moves that require a modicum of testicular fortitude?


Sure, Facebook isn’t the only game in town, but Trump has already been banned from Twitter, and the no-comments blog he tried to get off the ground went bust in less than a month.


Obviously, that’s hilarious, but it also points to one of the problems that comes with giving two or three companies a stranglehold on all online dialogues.


Most of us don’t have the know-how or the audience to launch a successful website on which we do nothing but share our thoughts, so if we were banned from Facebook and Twitter, the move would be tantamount to a sort of internet exile.


It’s tempting to look at situations like the Facebook ban or a crippling Big Mac addiction and think that they could only happen to Trump.


But one day you may find yourself posting your inane thoughts on a public library bulletin board, Secret Sauce dribbling from your chin, and you’ll look back on this day with profound regret.

South Korea: The celebrity tattooist criminalised for his art
2022-01-16