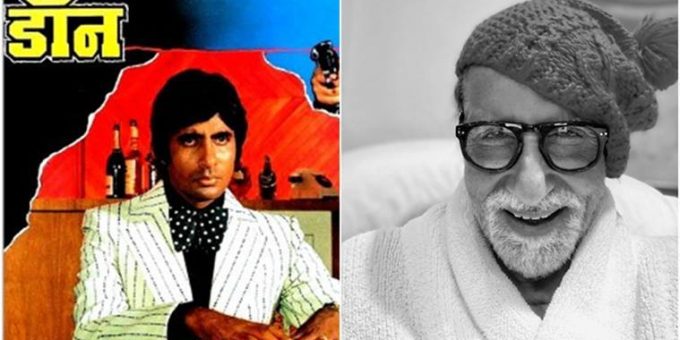 Written by A. Kameshwari
| New Delhi |

On his blog, Big B shared unseen photos and posters of the film. He also shared many interesting tidbits.

Accident on the sets

Don was bankrolled by cinematographer-producer Nariman Irani. However, he met with an accident on the sets and could not watch the film after its release.

“Nariman Bawa as we all affectionately called him a most humble, kindest person you would ever meet .. tragically passed away through a freak accident, and was not alive to see the release of the film …. while he was shooting for a film Nariman Bawa, suddenly noticed, that the set where they were working was about to crumble and fall .. a young child was playing around it .. Nariman fearing the kid would get crushed, ran , jumped on the kid and saved him , but in doing so he injured himself, as he fell .. and never came out of the complications that arose after that .. it was such a sad moment .. God’s own man .. simple, uncomplicated , soft spoken and a master in his craft .. just could not live to see the end of the film DON,” Amitabh Bachchan recalled.

Amitabh Bachchan remembered that he was awarded Best Actor for his performance in Don. The actor said he dedicated the award to Nariman Irani’s wife, who was very reluctant to come on the stage to receive the award with him.

He noted on his blog, “.. when the Filmfare award was announced for me as Best Actor, I dedicated the award to his wife .. and called her up on stage .. she was very reluctant but persuaded by several came up .. those days the award used to be announced months before .. would be held at Shanmukhanand Hall .. and the surprise moment would be who would come to give the award .. since the winner was already known..”

“Khaike Paan” was an afterthought

The most popular song of Don, “Khaike Paan” originally did not exist in the film. Amitabh Bachchan shared on his blog, “the song ‘khaike paan..’ an after thought .. Chandra showed the film to Manoj ji after the shoot was over and he suggested that there should be a song in the second half .. thats how this moment was created”

Amitabh recalled how back then the actors would do double shifts and on the day of the song shoot, he had blisters on his feet, making it difficult for him to walk. However, he completed the dance sequence with the help of anaesthesia injections.

” I was shooting in the morning shift 7am-2pm at China creek .. an outdoor location some miles our of the city .. it was an action sequence .. had injured my feet .. blisters all around .. and came to Mehboob Studios from China Creek to shoot this number .. had to dance bare feet .. blisters were impossible to walk on .. so what .. called the doc .. took anaesthesia injections in the feet and worked the 4-5 days that took to shoot it..” Big B wrote in his blog.

“.. there is a dance move in the song where the steps are me moving sideways .. thats a copy of Abhishek .. as a little fellow whenever he heard music he would dance and do this side step .. I copied that from him for the song .. there is another shot of me dancing and I turn around , show my back and keep moving my hips and look back .. that has a story too .. but of that some other time…” recalled Big B.

Interestingly, Abhishek went on to perform on Amitabh Bachchan’s song some years later.

Filmmakers were not convinced with Don’s title

Amitabh Bachchan shared that the makers were not convinced with the film’s title. “when Chandra and Salim-Javed announced the name of the film as DON .. no distributor was willing to accept the title .. they all thought it to be named after the DAWN underwear .. a popular brand during those times .. the film Godfather was just making a mark in film circles .. the word Don was unknown till then ..BUT what a life the film has had and its music .. quite remarkable” he wrote.