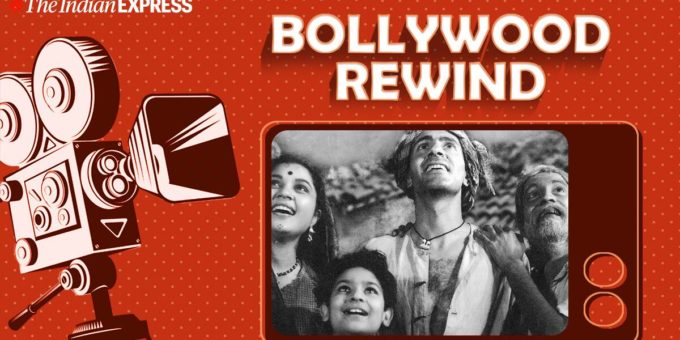 Poverty is a vicious cycle and getting out of that cycle is near-impossible. Bimal Roy’s 1953 film Do Bigha Zamin examines the unforgiving nature of poverty and how the system that’s supposed to help the poor, is designed to keep the less-fortunate in the same place.

Do Bigha Zamin opens in a village where the farmers are celebrating the rains after a long stretch of drought. As they sing “Hariyaala Saawan Dhol Bajaata Aaya,” it is hard to imagine that this would be the last time we see the protagonist, Shambhu and his family, experiencing joy because from here on, they are bombarded with tragedies.

Shambu, played by a convincing Balraj Sahni, and his family depend on their ‘Do Bigha Zamin’ for his livelihood so when the village zamindar forces Shambhu to sell his land, he takes a stand but without hurting the big man’s ego. After all, his ‘dharti’ is ‘maa’ and the zamindar, his ‘maai-baap’. For this naive man, selling the land is unimaginable so he decides to sell everything else he owns to pay off his debt.

But how will a humble, uneducated, poor man fight against the clever zamindar? Shambhu is trapped and has to pay off Rs 235 to the zamindar in three months, which is an impossible feat for a poor man like him. So, he sets off to Calcutta, the big city that promises a golden future. As he leaves his village on foot, and the village folk sing ‘Dharti Kahe Pukaar Ke’, you know things will get darker from here on. He longingly looks at his ‘dharti maa’ as the lyrics say ‘Tu phir aaye na aaye’ and it is evident that poor Shambhu is trapped in a maze with no escape.

Shambhu’s tryst to save Rs 235 has him facing one obstacle after another. The story of Do Bigha Zamin, by Salil Chowdhury, is so tragic that it leaves you gasping for breath. Every corner he turns to, is a dead end. Every lifeboat he gets on, sinks. His struggles start feeling claustrophobic because whatever he touches turns to ash. Do Bigha Zamin is the kind of film that pushes one into the dark corner of despair that stays with you for a long time.

Do Bigha Zamin is set at a time when India was still a young country and it is evident that at a time when changes were required from the ground up, the underprivileged class was ignored until they were needed for their hard labour. As the pandemic and resulting migration has shown us, little seems to have changed.

Do Bigha Zamin is a tragedy with no ray of hope.

It is famously known that Bimal Roy was inspired to make Do Bigha Zamin after he watched the 1948 film Bicycle Thieves. The character of Kanhaiya, Shambhu’s son, is an homage to Vittorio De Sica’s film. In the later years, Do Bigha Zamin was seen as the film that germinated the idea of new-wave cinema. Even though Indian cinema was still in its early years in the 1950s, films like this pushed the boundaries of what could be done on the silver screen.

Do Bigha Zamin rests on the strong shoulders of Balraj Sahni who actually ran barefoot on the hot asphalt roads of Calcutta while shooting the film. Balraj, who was known for playing the upscale gentleman in films, melted into the role of Shambhu and gave a defining performance that is sure to leave you pondering for hours. Despite being a 68-year-old film, Do Bigha Zamin has a sad soul that can still haunt the viewer.

Shambhu and Kanhaiya are swallowed by the big city as they try to save their ‘Do Bigha Zamin’.

Hrishikesh Mukherjee, who later became a celebrated filmmaker, was a key part of Bimal Ry’s team and in Do Bigha Zamin, Mukherjee was credited with screenplay, editing and even assisting Roy in direction. The film also features a short cameo by Meena Kumari, which comes as a pleasant surprise, perhaps the only one in this tragic tale. Nirupa Roy, who was later known for her iconic mother roles in films like Amar Akbar Anthony and Deewar, plays Shambhu’s wife Parvati here. Her demure personality combined with her naivety adds a bit of charm to the film.

Do Bigha Zamin is one of those must-watch films that have made the foundation for Hindi cinema. The tragedy of this film is in its soul, and that soul hasn’t aged a day.

Do Bigha Zamin is streaming on ZEE5 and ShemarooMe.

In this weekly column, we revisit gems from the golden years of Hindi cinema.