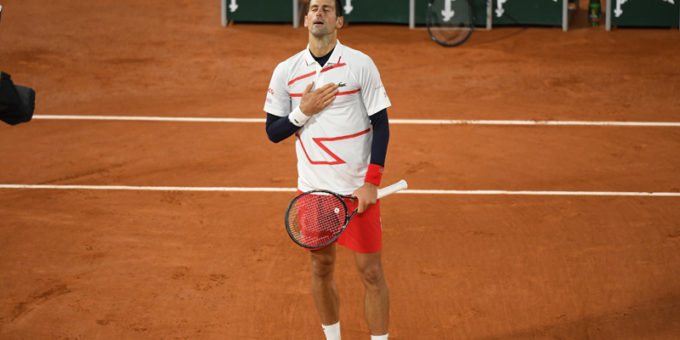 World number one Novak Djokovic said he was “feeling okay” after overcoming neck and shoulder troubles to defeat Pablo Carreno Busta on Wednesday and set up a French Open semi-final showdown with Stefanos Tsitsipas.

However, the 2020 Australian Open champion required
treatment on his upper left arm after dropping his first set of the tournament
on a chilly autumn evening in Paris.

“I definitely didn’t feel great coming onto the court
today, a few things happened in the warm-up,” said Djokovic. “I had
some neck issues and some shoulder issues. I don’t really want to get too much
into it. I’m feeling okay, I’m still in the tournament so I don’t want to
reveal too much. As the match went on, I felt better, didn’t feel as much
pain.”

The Serb now sits two wins away from becoming the first man
in half a century — and only the third in history — to win all four Slams
twice.

Tsitsipas made his second Grand Slam semi-final with a
straight-sets win over 13th seed Andrey Rublev, avenging last month’s loss to
the Russian in the Hamburg final.

“I’m expecting since a young age to potentially triumph
at these Grand Slams. I’m happy that I’m able to be in a position where I am
today,” said Tsitsipas. “I’m chasing something spectacular. Despite
not having a good start and being a break down, I remembered what a big fighter
I am. It’s also about fighting and trying to find solutions in difficult
moments. I managed to put my brain to work.”

Tsitsipas, 22, has now won 15 successive sets at the
tournament having been two sets down to Jaume Munar in the opening round.

However that streak looked in peril when Rublev, also making
his first French Open quarter-final appearance, served for the opening set at
5-4.