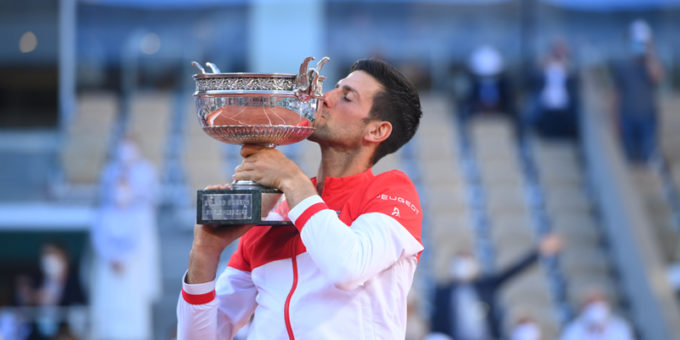 Novak Djokovic has revealed that never
doubted that he could launch a dramatic fightback from two sets down to beat
Stefanos Tsitsipas in Sunday’s French Open final.

While doing so, Djokovic became the first
man in 52 years to win all four majors twice.

The victory was even more special as it
came in four hours followed having to also play four hours to beat 13-time
champion Rafael Nadal in the semi-finals on Friday.

“I have played almost nine hours over
the last 48 hours against two great champions,” said Djokovic. “It was really
tough physically over the last three days, but I trusted in my capabilities and
knew I could do it. It was an electric atmosphere. I want to thank everyone who
has been with me on this journey.”

Djokovic is now just one major away from
equalling the all-time record of 20, jointly held by Roger Federer and Rafael
Nadal.

He has time on his side. He is a year
younger than Nadal and has the best part of six years on Federer.

It was a second French Open crown for
Djokovic after his 2016 victory and adds to his nine Australian Opens, five
Wimbledon titles and three at the US Open.

He is the first man since Rod Laver in 1969
to win all four Slams on multiple occasions and just the third in history.

“I would like to say a few words to Stefanos. I can relate to what he’s going through and I understand how difficult it is to lose in the final,” said Djokovic who has lost four finals in Paris — three against Nadal and one to Stan Wawrinka. “These are the kind of matches you learn from most and knowing him and his team, he will come out much stronger. I definitely believe he will win many Grand Slams in the future.”

Tsitsipas hailed Djokovic as a great
champion as his first Slam final appearance ended in a heartbreaking defeat
having been in command for the first two sets.

It was his third successive loss on clay to
the Serb after they played a five-set semi-final at the 2020 French Open and
the quarter-finals in Rome on the eve of this year’s French Open.

“I tried my best,” said
weary-looking world number five Tsitsipas. “I had a good run and am happy
with myself, but let’s give it to Novak because he has shown us over the past
couple of years what a great champion he is. I am inspired by the things he has
achieved and I hope one day I can maybe do half of what he has done so
far.”

“To see these two great champions and
watch these guys is unbelievable,” he said. “Unfortunately tennis is
a tough sport, it is only one winner. Perhaps it should be two.”