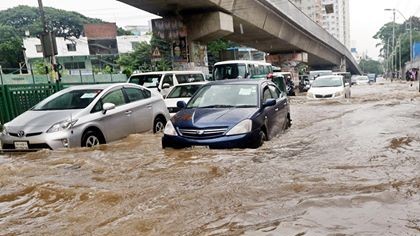 Dhaka city was inundated for the second day in the row due to the torrential rains which started Monday, once again exposing the capital’s poor drainage system.

Roads and lanes of Rajarbagh, Kakrail, Malibagh, Mouchak, Moghbazar, Karwan Bazar, Tejkunipara, Green Road, Begum Rokeya Sarani and many low-lying areas in the capital were inundated due to the rain.

Contacted, Dhaka North City Corporation Mayor Atiqul Islam said he was going to Rokeya Sarani to “see the sufferings of the people” and will take “prompt decision to reduce the waterlogging”.

He said waterlogging next to the Metro Rail and Elevated Expressway was happening as the authorities concerned did not take proper steps.

“We will hold a meeting with all stakeholders within a few days to solve the problem,” he said.

So, if the Wasa handed over the authority to the DSCC, it will certainly deal with the issue in a proper and effective manner, he said.

Besides, Bangladesh Water Development Board could pump out the water but were are not doing so, he said.

According to the Bangladesh Meteorological Department (BMD), the city experienced 87 millimetres of rainfall in the last 24 hours till 6:00 am today.

Md Aftab Uddin, meteorologist of the BMD, said the monsoon rains may continue for two to three more days.