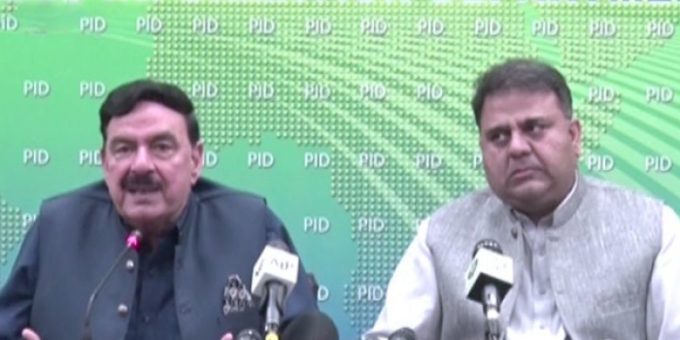 Addressing a press conference in Islamabad alongside Interior Minister Sheikh Rashid Ahmed, the minister said that the entire situation started due to a fake post by someone claiming to be Tehreek-i-Taliban Pakistan (TTP) militant Ehsanullah Ehsan.

Fawad said that in August, a fake post was created under Ehsan’s name which told the New Zealand cricket board and government to refrain from sending the team to Pakistan as it would be “targeted”.

He said that following this post, the bureau chief of The Sunday Guardian, Abhinandan Mishra, published an article claiming that the team may face a terror threat in Pakistan citing the fake post by Ehsan.

According to its website, The Sunday Guardian was founded by politician MJ Akbar, who served as the minister for external affairs in the Modi-led BJP government till 2018.

He said that on August 24, New Zealand opener Martin Guptill’s wife received an email threatening her husband from ID with the username “Tehreek-i-Labbaik”.

“When we investigated further, we discovered some facts. Firstly, this email is not affiliated with any social media network […] and only one email has been generated from this account,” he said.

The minister added that the email was sent via ProtonMail, a secure service. “The details [of the email] are not available and we have requested Interpol to assist us and tell us how it was generated.”

Despite these events, the New Zealand cricket team did not cancel the tour at this point and travelled to Pakistan. “As the interior minister said, the security we provided outnumbered the number of people in their forces,” he said.

However, on the day of the first match New Zealand officials said that their government had concerns of a credible threat and cancelled the tour, he said.

“Pakistan Cricket Board officials, the interior ministry security team, everyone went to them and asked them to share the threat … [but] they were as clueless as us.”

He said that a day later, a second threatening email was sent to the New Zealand team using the ID, Hamza Afridi.

He said that when authorities probed the email, they discovered that it was sent from a device associated with India. “It was sent using a virtual private network (VPN) so the location was shown as Singapore.”

He said that the same device had 13 other IDs, nearly all of which were Indian names. “All IDs were made using the names of Indian actors and celebrities. Only the name Hamza Afridi is different to show that this email was generated from Pakistan.

“His name was used deliberately to show that a terrorist threat is present in Pakistan.”

He said that the user of the particular device had been identified as Omprakash Mishra from Maharashtra. “The device used to send the threat to the New Zealand team belonged to India. A fake ID was used but it was sent from Maharashtra.”

The minister added that the interior ministry had registered a case and had requested Interpol for assistance and information on the Tehreek-i-Labbaik ProtonMail and the ID of Hamza Afridi.

“This whole threat was primarily generated from India.”

He said that the West Indies team was travelling to Pakistan in December. “A threat has already been issued to the team,” he said, adding that this was also issued via a ProtonMail account.

“This is unfortunate. We believe this is a campaign against international cricket. The International Cricket Council (ICC) and other bodies must take notice,” he said, adding that it was apparent that a fake threat was created by India to cancel the New Zealand tour.

He also called on the New Zealand government to share the specifics of the threat they had received. He said that Foreign Minister Shah Mahmood Qureshi — who is currently in New York to attend the United Nations General Assembly — had also lodged a strong protest with New Zealand.

Commenting on England’s decision to follow in the footsteps of the Kiwis, Fawad said that British High Commissioner Christian Turner had made it clear that the United Kingdom government’s advisory for Pakistan was not being changed.

“So if the government has no reservations, who is the English Cricket Board [to cancel the tour]? To claim that players are tired is a shoddy excuse,” he said.

He added that he had asked Pakistan Television to evaluate the financial losses it had suffered. “We are working on this and if our legal team permits, we will sue the ECB,” he said.

Meanwhile, Interior Minister Sheikh Rashid said that if anyone thought Pakistan would be isolated from NZ’s tour cancellation, “they are bereft of reason”.

“We can not be isolated and the day of the New Zealand [tour cancellation], I said that England’s team would not come as well,” the interior minister said.

“Cricket is our passion but disappointment is [equivalent] to disbelief. A day will come when the teams of the world will come to Pakistan,” Rashid said.

He said the entire situation had been “blown up” and had told the information minister earlier that the matter should now be closed, adding that “we have other big problems [to focus on].”

Rashid claimed that “India frees many people from prison on bail and then trains them. It is not desisting from [promoting] terrorism in Pakistan.”

Recounting Pakistan’s sacrifices, he said the country had thwarted terrorism before as well. “Peace is our stance and it will be established in the country.”

He said Pakistan had played a “historic role” and had evacuated over 10,000 people from Afghanistan including Nato forces, IMF and World Bank personnel and Americans.

He said the Torkham and Chaman borders were functioning normally and more people were going to Afghanistan from Pakistan than those coming here.

“Everything is peaceful. This is all a drama and the gloved hands behind this drama will be unsuccessful.

“Pakistan is a great nation and has great security agencies and army. There is an elected government and no one can isolate us. We will move forward,” the interior minister stressed.