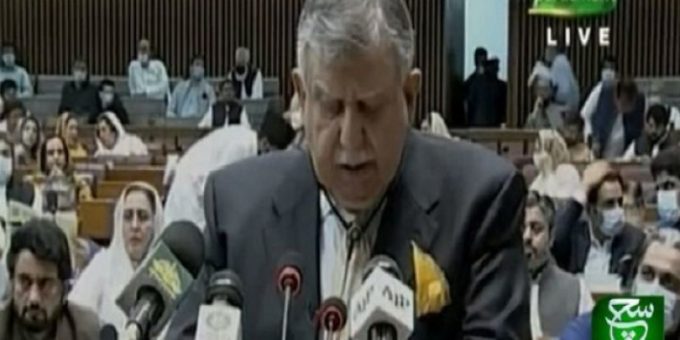 Leader of the Opposition in the National Assembly Shehbaz Sharif and PPP chief Bilawal Bhutto Zardari were in the house during the budget proceedings. Earlier, Bilawal met Sharif at his chamber in the assembly and they decided both parties would jointly protest the PTI’s budget.

Tarin began his speech by saying it was an honour for him to present the PTI’s third budget.

He said there were a lot of difficulties but this government had laid the ground for the economy to revive and now “it is going towards development and prosperity”.

Tarin said the total expenditure budgeted for next year stood at Rs8,487 billion — almost 19 per cent higher than the last year’s budget size of Rs7,136 billion.

Expenditure on Defence Services makes up around 16pc of total expenditure budgeted for FY22, down from 18pc last year.

Fiscal deficit for FY22 has been budgeted at Rs3,420 billion, which is around 6.3pc of the GDP, down from 7pc last year.

Total allocations for the Public Sector Development Programme (PSDP) have been budgeted at Rs2,135 billion for FY22, up 37 per cent from Rs1,324 billion last year.

He recalled that when the PTI came into power, the economy had gone almost bankrupt. “Everyone knows we were under the burden of so many loans,” he said, adding that the current account deficit was at a historic high of $20 billion.

“During this time, exports were contracting and there was over a 100 per cent increase in imports,” Tarin added. “Despite this context, a 5.5pc growth rate was harped on about.”

Tarin said the PTI government had to do all repayments to save Pakistan from default.

“It took time to stabilise the economy due to the pandemic but we achieved our targets. The $20bn current account deficit has been turned into a surplus of $800 million while a 3.6pc primary deficit reduced to 1pc,” Tarin said.

“After many efforts, the government has been successful in putting the economy on the path of development.”

The finance minister announced that for FY22, the government had set GDP growth target at 4.8pc.

“We hope growth will be even higher than that due to the measures we have taken in this budget. Like in the past, we will not leave the weak segments of our society at mercy of the trickledown effect.”

He said in the next couple of years, the government wants to increase growth to 6-7 per cent.

For the upcoming fiscal year, the government targets to keep inflation at 8.2pc, which is significantly higher than the 6.5pc targeted for FY21.

The government has set the tax collection target for the Federal Board of Revenue (FBR) at Rs5,829 billion for FY22, which is 17.4pc higher than last year’s Rs4,963 billion.

The finance minister announced that there was no new tax being imposed on the salaried class in the budget.

He added that in order to support small businesses, the annual turnover tax ceiling has been increased from Rs10 million to Rs100 million, while sales tax is being reduced.

“Burgeoning prices of locally manufactured small cars is a major concern for low-earning families. It is proposed that small cars up to an engine capacity of 850cc may be exempted from value-added tax besides reducing sales tax rate on these from 17pc to 12.5pc,” Tarin said.

“To support electric cars, the government of Pakistan wants to support manufacturing of electric cars for which a lot of tax relaxations are being given.”

He said Pakistan witnessed an “unprecedented” rise in online market sales during the Covid-19 lockdown. “However, the contribution of these e-commerce platforms to the economy is minimal, hence it is proposed to bring e-commerce transactions into the sales tax net,” he said.

The minister also announced that a tax exemption is being given on ‘Auto Disable Syringes’ with an aim to minimise the impact of deadly diseases like Covid-19.

Federal excise duty on telecommunication is being reduced from 17pc to 16pc, he said.

Earlier, as Prime Minister Imran Khan arrived in the parliament building for the session, he was asked by a reporter whether the budget will be people-friendly. “Everyone will be happy [with the budget],” he replied.

Prior to the budget session, PPP chairperson Bilawal-Bhutto Zardari chaired a meeting of the PPP parliamentary committee to decide the party’s strategy for the session.

Bilawal directed PPP MNAs to give a “tough time” to the government, saying the government had devised an “anti-poor”, “political” and “selected” budget.

Facebook Messenger Getting a Redesign, Will Remove Discover Tab: Report
2020-03-01