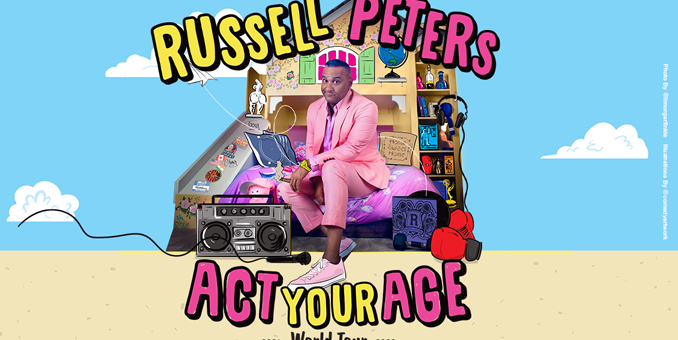 Russell Peters returns to the global stage with an all new world tour.

The first phase of The Russell Peters Act Your Age World Tour starts in January 2022 with shows across the US and the UK.

Additional shows will be added and announced as the tour unfolds across Asia, Africa, Australia, the Middle East and of course, Canada.

The Act Your Age World Tour will be at the Utilita Arena in Birmingham on Tuesday 17th May, The SSE Arena, Wembley (London) on Thursday 19th May and the O2 Apollo in Manchester on Saturday 21st May.

He said: “I was supposed to start this tour in 2020, but then, I’m not sure if you guys heard, but something happened…” .

Tickets go on general sale from 9am on Friday 29 October , available from www.aegpresents.co.uk/RussellPeters2022.

Peters last played the UK in 2018 as part of his Deported World Tour which was seen by over 400,000 fans in 40 cities across 20 countries and culminated in the stand-up special, ‘Russell Peters Deported’, on Amazon Prime in January 2020.

100 days to Beijing, Canadian Olympians are kicking it into high gear

War Of Words Between Mohammad Amir And Harbhajan Singh