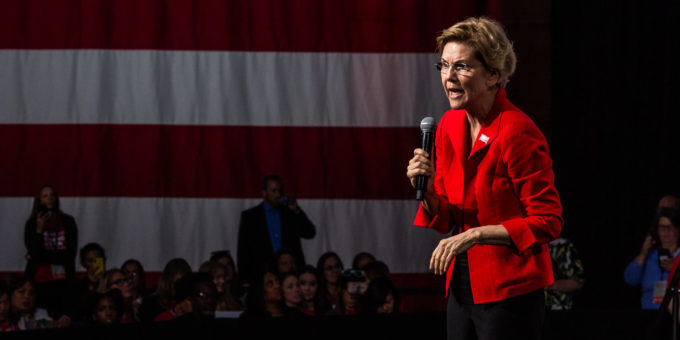 At the forum, Ms. Warren and other Democrats presented themselves as determined to address the issue of guns. “I’ve taken on the N.R.A., nationally, and I’ve beaten them,” said former Vice President Joseph R. Biden Jr., adding of the Second Amendment, “No amendment is, in fact, absolute.”

Mr. Biden also recalled meeting with “the kids from Parkland” when he was vice president; Mr. Biden left office in January 2017, and the school shooting in Parkland, Fla., occurred over a year later.

A Biden aide later clarified that Mr. Biden met with families after the 2012 school shooting in Newtown, Conn., when he was vice president, and that he met with Parkland survivors after leaving office.

Senator Bernie Sanders of Vermont offered a message for Mr. McConnell: “Reconvene the United States Senate now,” he said. “If McConnell wants to vote against gun safety legislation, let him vote against it. But reconvene the United States Senate. Let’s have that discussion. Let’s have that vote. Do what the American people want.” (Mr. McConnell has said he wants to pass bipartisan legislation, but he does not plan to bring the Senate back from its August recess.)

Mayor Pete Buttigieg of South Bend, Ind., whose candidacy is rooted in generational change, cited the power of young people pushing for action on gun safety. He said he was motivated to run for president to counter the notion that the United States had “accepted the unacceptable” throughout his lifetime — including on gun violence.

“Shame on us, God help us, if 20 years from now there’s a candidate forum with presidential candidates in the aftermath of mass shootings and a day-to-day beat of daily shootings, saying, ‘O.K., what are we going to do to make sure it’s different this time?’” he said. “Let’s not let that happen.”

There were nearly 40,000 gun deaths in the United States in 2017, 60 percent of which were suicides, according to the Centers for Disease Control and Prevention.

Displaced by fighting, Libyans fear ending up ‘on the street’